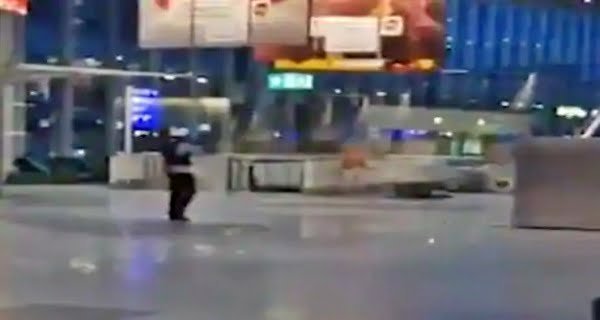 Frankfurt: When police stopped a man for not wearing a mask at Frankfurt Airport in Germany, he raised the slogan of Allahu Akbar and threatened to kill him. When the police wanted to apprehend him, the accused passenger ran away leaving his baggage. After this, the police evacuated the airport and caught the threatening person at gunpoint. The passenger caught is a resident of Slovenia. The accused threatened the police before leaving his belongings and running away. He said, ‘I will kill you, Allahu Akbar.’ The police then chased him and Terminal-1 of the airport was evacuated. It is visible in the viral footage of the incident that some armed officers surround the accused while other passengers went outside the airport. Not only this, but train services running from the airport were also stopped.

At the airport, the police spokesperson said that a police team followed a Slovenian man who was not wearing a mask. The accused showed immediate aggressive behavior with the police and said, ‘I will kill you, Allahu Akbar.’ Police said that because of this behavior of the accused, the policemen thought that his threat was serious. After this, when the person tried to escape, the police arrested him at gunpoint.

Due to the accused suitcase, a large part of the departure hall was evacuated. There have been some reports that another armed person was present at another terminal. The police have not ruled out a connection between the two incidents. Because of these two, the large area was taken into security cover and the people present there were evicted. The airport was opened at around 8 pm local time. The interrogation of the accused is underway.

China, India agree to handle their differences through peaceful discussion

06/06/2020
India and China have agreed that the two countries to handle their differences through peaceful discussion. Joint Secretary (East Asia) in Ministry of External...

Hemant government opened treasury for poor Dhoti-saree to be given twice a year for...

16/10/2020
Ranchi: A cabinet meeting was held on Friday under the leadership of Chief Minister Hemant Soren. In this, a total of 37 proposals were...