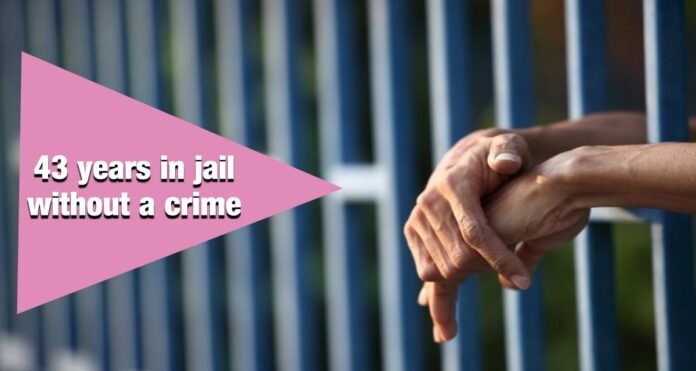 New Delhi: Sometimes there is so much delay in the judicial process that by the time the court’s decision comes, the whole life goes away. Yes, today we are going to tell you a similar case, knowing that you will also be surprised. Well, once a person falls in the circle of court, then it is not known how long it may take for a person to get out of there.

Yes, today we are going to tell you the story of one such person who spent more than half of his life i.e. 43 years in jail without any crime, although now the court has acquitted him. Let us know what is the full story….

Kevin said….
Regarding this, Kevin has said, “There were many murders in 1978 due to shootings, but he had no connection with these incidents. He was watching TV when this incident happened. The woman, an eyewitness to the incident and a survivor of the shooting, had been deferring her testimony for many years. The woman says, she was doing this because of the pressure of the police. Kevin was acquitted after the testimony.”

Financial aid received
Let us tell you that after being in jail for so many years without any crime, Kevin has not received any kind of compensation. So the locals decided to help Kevin. An online campaign was launched to help Kevin start a new life. The campaign paid off and about 20 thousand people together collected around Rs 11 crore for Kevin.

Unique campaign for Kevin
Kevin says he is thankful for this decision. Rojo Bushnell of the Midwest Innocent Project has campaigned to raise funds for Kevin’s acquittal. They say that Kevin does not have a bank account, no phone number, nor any government document of identity. Presently he is living at his brother’s house. They will get the amount soon. With the help of this amount, Kevin will be able to start his new life.

Court released
Let us tell you that last week the Missouri Court of Appeals ordered the release of Kevin. According to the verdict issued by the court, the evidence presented was insufficient to convict Kevin. So Kevin is acquitted. Kevin is overjoyed on his return and has thanked God for it. Now they want to move forward in their life.

Third Wave may hit end of August, May Not be as Deadly as Second...

07/10/2020/10:28:pm
Mumbai: Akshara Singh, angered by the incident of rape, including the Hathras incident, said that the rapists should ('shoot at the crossroads')Chorahe pe goli...

14/09/2020/9:44:pm
Beijing: Based on the tweet made on Monday by US Secretary of State Mike Pompeo, there are signs that US Ambassador to China Terry...

23/11/2021/10:28:am
New Delhi: Shares of Paytm's parent company One97 Communications Ltd continued to decline on the second day of listing. However, on Tuesday, there is...