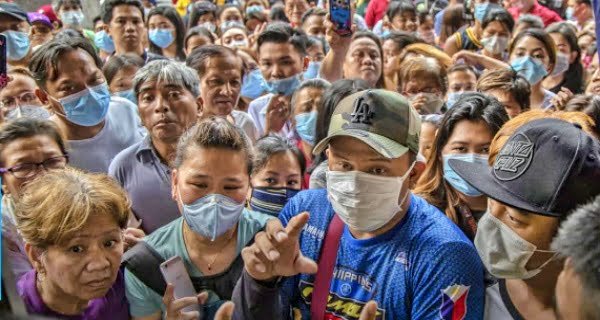 Manila: Due to the increasing Corona cases in the Philippines, the administration has imposed strict rules. There is a lockdown in many parts of the country, and a curfew is in place in many places. In such a case, a heartbreaking case has come to light. In the Philippines, a man was caught for breaking curfew and allegedly punished by him so severely that he died. According to a report in the New York Post, this man was given 300 sit-ups after which he was unable to stand on his feet and his condition deteriorated which led to his death. The local administration is now investigating these allegations.

According to the report, the 28-year-old Daren, a man in a province in the Philippines capital Manila, came out of his home to get drinking water, after which he was caught by a local group for breaking the lockdown rule and taken to a local police station . After this, he had to hold hundreds of sit-ups in the police station for violation of rules.

After this, as soon as Daren reached home, he told his partner that, he was in so much pain that he could not even stand with his feet. In a conversation with GMA News, the woman said that Darren had a heart problem and was in a lot of trouble when he came home. He said that, when I asked Darren why he was unable to walk, he told that the policemen asked him to have 100 sit-ups and this was increased to about 300 sit-ups. The reason for this is that he said that whenever his sit-ups were not right, he would be extended.

Darren’s partner also showed a video to local media in which he is seen in pain and difficulty in standing on his feet can be seen. Darren’s relatives have now demanded an investigation and action in the case.

New guidelines of Corona released on Holi, know what to do and what not...

24/03/2021
New Delhi: The ever-increasing cases of Coronavirus have faded the festive color Coronavirus Holi Guidelines). In view of Holi, the Delhi government has imposed...

14/10/2020
Patna: Before Bihar Assembly Election, the process of change of leaders is going on. In this sequence, Subhashini Yadav, daughter of veteran politician Sharad...

With 828,810 confirmed cases, Brazil number second to US

13/06/2020
Brazil’s COVID-19 death toll overtook Britain’s on Friday to become the second highest in the world with 41,828 dead, but the World Health Organization...

31/03/2021
Washington: US President Joe Biden on Tuesday nominated two black women and the first Muslim judge to be appointed to federal judgeships. It includes...

11/09/2020
Indore: Alleged violations of rescue guidelines from Covid-19 during the "Narmada Kalash Yatra" of BJP mobilizing a large number of women in Saver...