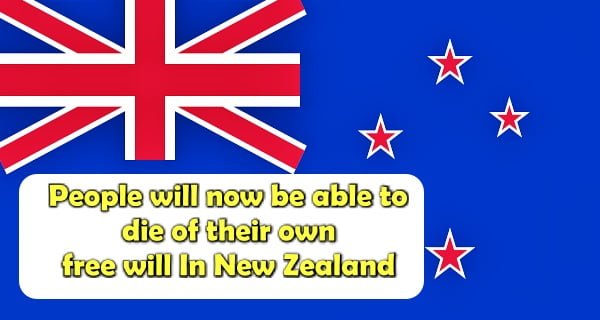 New Delhi: The End of Life Choice Act has come into force in New Zealand. This law has been implemented in the country on Sunday. Now people here can die at will. Let us tell you that this law was earlier given legal status in countries like Canada, Australia, Spain, Netherlands, Colombia, and Switzerland.

In all these natives, there are many rules related to cooperation in death. The same condition has been placed in New Zealand as well. In this country, those people will be allowed to die of their own free will, which is a terminal illness. Due to which the death of the person is going to happen in the next six months. It is mandatory for that person to take the consent of two or more doctors.

A referendum was held in New Zealand to implement this law, in which 65% of the people voted in favor of it. It is to be known that there has been a debate in New Zealand for many years over the implementation of the euthanasia law, which has finally been implemented today.

You must have sounded very strange to hear this, but the people of Cook have breathed a sigh of relief with this decision. Stuart Armstrong, 61, is suffering from prostate cancer, which has no cure. Armstrong says that now he is not worried about how he will die, because there will be no pain in euthanasia.

People are also against this law
Many people in New Zealand are also opposing this. They say that euthanasia will weaken society’s respect for human life and values. This will lead to a reduction in care for vulnerable people, especially those with disabilities or in the late days of life. The same people who support this law say that no man has the right when and how he wants to die. The death of euthanasia gives him the right to die with honor.

But many doctors have come out against this law. They believe that if the patient is given proper care, it is not necessary that he needs euthanasia. But in many cases, it has also been seen that despite the care, many people are not cured.

03/01/2022/10:21:am
Tesla founder and CEO Elon Musk have revealed that the first employee hired for his electric vehicle company's Autopilot team was an Indian. Elon...

17/09/2021/10:22:pm
London: British inventor and entrepreneur Clive Sinclair, who worked the most to encourage an entire generation of children in the field of computer and...

Non-local laborers on target of terrorists, order issued to send them to security camps...

17/10/2021/10:00:pm
Srinagar: Police and administration have swung into action after non-local laborers were continuously targeted by terrorists in Jammu and Kashmir. According to news agency...

China now explodes in water, can destroy US ports in minutes