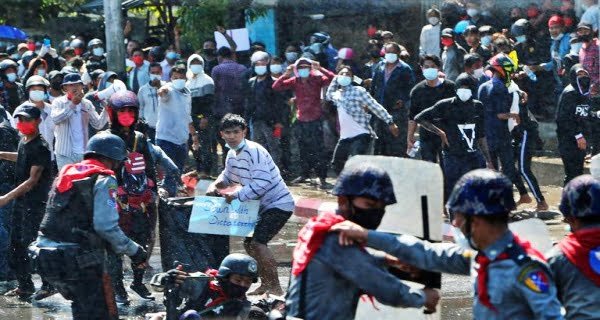 Yangon: Police have taken action against the people who are protesting against the military coup in Myanmar. People took to the streets on Tuesday despite demonstrations being declared illegal. Water splashes were used to disperse the protesters in Myanmar’s second-largest city, Mandalay.

Witnesses said that two bullets were fired as a warning to drive away from the crowd. According to social media reports, the police have arrested more than two dozen people from there. Police also used water cannons and fired in the air on the second day. The protesters are demanding that the power be returned to the elected civilian government. Together they demand that the elected leader Aung San Suu Kyi and other leaders of the ruling party be released.

For some areas in Yangon and Mandalay, an order has been issued on Monday prohibiting the rallies and gathering of more than five people. Also, curfew has been imposed from 8 am to 4 am. Protests also took place in Bago city on Tuesday where the elders of the city spoke to the police to avert violent confrontation. Water splashes were also used in the mega ways of central Myanmar. Demonstrations have been taking place in the country’s largest city of Yangon since Saturday.

The army has a history of crushing the rebellion with brutality. The army is accused of committing genocide in the Anti-Terrorism Campaign in 2017, due to which more than seven lakh minority Rohingya Muslims have to take refuge in Bangladesh for protection. Government media on Monday, citing protesters for the first time, claimed that these put the country’s stability at risk.

The statement of the Ministry of Information read on the official TV MRTV said, “Democracy can be destroyed if there is no discipline.” It says, “We violate the stability of the state, security of the people and rule of law.” Will take legal action to stop the acts.

The military commander, who led a coup in Myanmar, made no mention of the demonstrations in his 20-minute speech on Monday night. He is now the leader of the country and he has come for the first time after taking power in his own hands. Senior General Min Ang Hling repeatedly claimed that the election was rigged and he justified the military coup. The Election Commission has dismissed this charge. He said that the junta (military rule) will hold elections in a year and hand over power to the winner.

15/06/2020
Paris: French President Emmanuel Macron has announced that France is fully reopening its economy, including all restaurants, to accelerate the country's recovery after virus...

18/07/2020
New Delhi: Commander-level talks have been held several times between India and China to reduce tension on the Line of Actual Control / LAC....

27/07/2020
New Delhi: Aatmanirbhar Bharat App Innovation Challenge has seen a very enthusiastic response from tech entrepreneurs and Start-ups from across the country. A total of...

Gadkari took initiative of ‘Vedic paint’ to increase farmers’ income, know how it will...

18/12/2020
New Delhi: Where on the one hand the farmer of the country is fighting with the Modi government over the controversial 'agricultural laws'. At...

15/08/2020
Washington: While Russia has claimed to have created the Coronavirus Vaccine, the US is still not ready to accept it. Meanwhile, news has come...