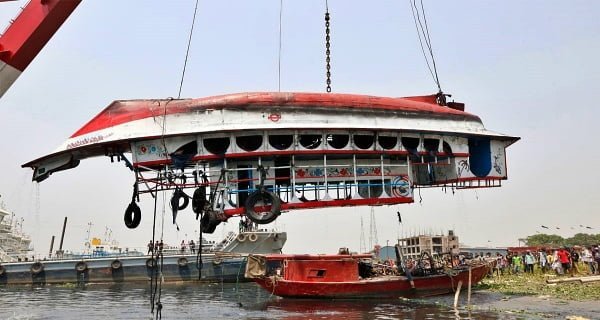 Bangladesh: At least 26 people were killed when a small passenger vessel carrying more than 100 people crashed into a cargo vessel carrying over 100 people in Bangladesh’s Shitlakhya River. The incident took place in Narayanganj district on Sunday evening, which is located about 16 km southeast of the capital Dhaka. The Dhaka Tribune reported that five bodies were recovered on Sunday and a total of 21 bodies were recovered by the Navy, Coast Guard, fire service, and police on Monday.

According to the news, the passenger ship ‘ML Sabit Al Hasan’ sank near the Saidpur Coal Ghat in Munshiganj near Shidlakhya river after a collision with the cargo ship ‘SKL-3’. Police and eyewitnesses said that the cargo ship fled from thereafter the collision. Narayanganj Deputy Commissioner Mustain Bila said that a seven-member committee has been formed under the chairmanship of the Additional District Magistrate to investigate the incident.

He said that the district administration will give 25-25 thousand taka as compensation to the families of the deceased for the cremation of the dead bodies. Bangladesh’s Inland Water Transport Authority has also formed a four-member committee to investigate the incident. Coastal police in charge Deepak Chandra Saha confirmed that 50-60 people swam to the banks of the river, out of which three have been admitted to the hospital. Abdullah Al Arefin, Deputy Director of Fire Services and Civil Defense in Narayanganj district, said that due to the storm, he was delayed in starting relief and rescue operations. Rescue work is still going on.

Domestic Internet may soon be cheaper, Government is going to take this step

24/06/2020
New Delhi:The demand for high-speed Internet has increased due to increasing trend from Work From Home due to Corona virus epidemic. The central government...

26/08/2020
New Delhi: The Narcotics Control Bureau has registered an FIR on Wednesday on the drugs angle in the Sushant Singh Rajput case. NCB has...

On the quarantine of IPS Vinay Tiwari, CM Nitish said – what happened did...

03/08/2020
Patna: Ever since the Bihar Police started investigations into the death of actor Sushant Singh Rajput, the uproar has been increasing. Meanwhile, Bihar Police...

Bioentech hopes their vaccine will be effective against Corona’s redesign

23/12/2020
Berlin: Germany-based pharmaceutical company BioNTech has expressed confidence that its vaccine (Vaccine) that protects against the Coronavirus is also effective against the new form...