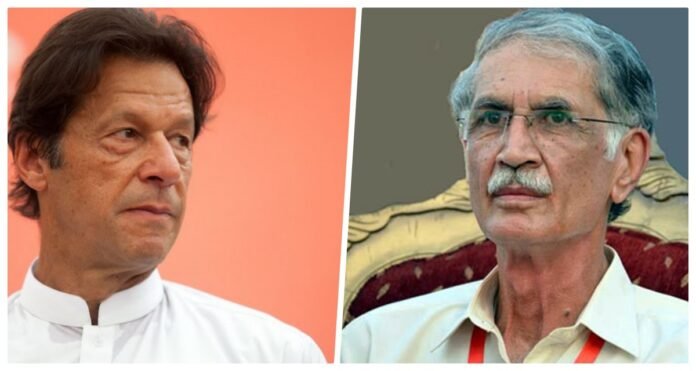 Islamabad: The Parliamentary Party meeting between Pakistan Prime Minister Imran Khan and Defense Minister Parvez Khattak led to a heated debate over the neglect of Khyber Pakhtunkhwa province. Khattak had reportedly questioned the government’s neglect of northwestern Khyber Pakhtunkhwa province and said he would not vote for Khan, which angered Prime Minister Khan. This information was given in a media report on Friday.

The matter came up during a meeting of the ruling coalition’s parliamentary party, chaired by Prime Minister Khan, at the Parliament House on Thursday, Dawn reported. While attending a meeting called in Parliament to approve a controversial Supplementary Finance Bill-2022 (commonly referred to as the Mini Budget), the Defense Minister reportedly said that if people in less developed provinces do not get new gas connections If given, he would not vote for Prime Minister Khan. Khattak represents Nowshera-I of Khyber Pakhtunkhwa (KP) province in the parliament.

Sources said Khattak’s complaint angered Prime Minister Imran Khan and asked him to stop “blackmailing” him. According to the news, after this, the Defense Minister left the meeting room, but later the Prime Minister called him back. After the meeting, the Prime Minister stayed in his chamber for almost the entire day and met several MPs from Pakistan Tehreek-e-Insaf (PTI) and other parties of the ruling coalition. According to sources, Khattak was of the view that the province was being neglected in the matter of provision of electricity and gas, while these facilities were being enjoyed by the people of other provinces.

Sources were quoted in the news as saying that the Defense Minister told the Prime Minister that if this situation prevails then the people of the state will not vote for ‘PTI’. Khattar, however, told the media after the meeting that he neither spoke harshly to the prime minister nor threatened to not vote for Khan. He raised the issue of gas shortage in Kewalya province and the ban on new gas connections. “Imran Khan is my leader and prime minister. I did not tell them that if people of KP are not given gas connections, I will not vote for them.” Khattar said that he had gone out of the meeting room to smoke a cigarette.

“I am used to smoking cigarettes and I had just gone out of the room to smoke,” he said. Special Assistant to the Prime Minister on Political Affairs Shahbaz Gill later confirmed that Khattak had raised the issue of non-provision of gas for the people of Khyber Pakhtunkhwa. He said the Defense Minister told Energy Minister Hammad Azhar that gas supply schemes in Khyber Pakhtunkhwa were being blocked and no new gas connections were being provided to the people of the province. According to reports, after the Parliamentary Party meeting, the Prime Minister called the Defense Minister to his chamber and he again expressed his displeasure over Khattak’s “attitude”.

20/09/2021/8:21:pm
Prayagraj: Mahant Narendra Giri, president of the Akhara Parishad, died on Monday in suspicious circumstances. According to the information, he has died in Prayagraj....

Kamla Harris: “rain or sunshine, democracy does not wait for anyone”

20/10/2020/10:24:pm
Washington: Democratic Party candidate Kamala Harris for the post of Vice President in America has said that rain or sunshine, democracy does not wait...

5 agreements between India and Bangladesh