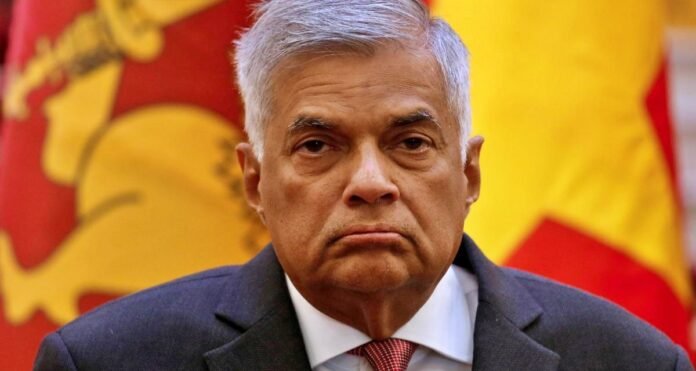 Colombo: Sri Lanka’s newly appointed Prime Minister Ranil Wickremesinghe addressed the nation on Monday. He said that the country’s economy is in a very precarious state and the government is facing many serious concerns. He said that only one day’s petrol stock is left in the country. Apart from this, the daily power cut can extend up to 15 hours a day. He said that his goal is not to save any individual, family, or group but to save the country in distress.

In his televised address to the nation after becoming prime minister last week, United National Party (UNP) leader Wickremesinghe (73) said Sri Lanka’s economy is “very uncertain” at the moment. Although the revenue of SLR 2.3 trillion in the previous government budget, SLR 1.6 trillion is the actual estimate of this year’s revenue.

PM Wickremesinghe said that, in November 2019, our foreign exchange reserves stood at USD 7.5 billion. However, today, locating the USD 1 million for the treasure remains a challenge. The finance ministry is finding it difficult to raise the USD 5 million needed to import the gas.

We are facing many serious concerns. To ease the queues, we need to get about 75 million USD in the next few days. At present we have petrol stock for only one day. Diesel shipments that arrived today will address the shortage of diesel to some extent.

The Prime Minister further said that one-fourth of the electricity in the country is generated from oil. Hence, there is a possibility that the daily power cut will increase to 15 hours a day. However, we have already received money to avert this crisis. We have to get 20 million USD immediately to make gas available to consumers.

He further said that we plan to present a new alternative budget to the proposed development budget for 2022. It is intended to be presented as a concessional budget. He said that I propose to privatize Sri Lankan Airlines, which is incurring huge losses. The loss for 2020-2021 alone is SLR 45 billion. The total deficit till 31 March 2022 was Rs 372 billion. Even if we privatize Sri Lankan Airlines, it is a loss we will have to bear.

Significantly, Wickremesinghe was appointed as the 26th Prime Minister of Sri Lanka on Thursday as the country was without a government since Monday. Then-Prime Minister Mahinda Rajapaksa resigned from his post after violence erupted after his supporters attacked anti-government protesters.

It is noteworthy that Sri Lanka is going through the worst economic crisis since its independence in 1948. The acute shortage of foreign exchange reserves has led to long queues for fuel, cooking gas and other essentials, and heavy power cuts and rising food prices have added to the woes of the people. The economic crisis led to a political crisis in Sri Lanka and calls for the resignation of the influential Rajapaksa. President Gotabaya refused to resign but he appointed a new prime minister and youth cabinet last week. The new government will introduce significant constitutional reforms to curtail the powers of the President.

08/08/2021/11:37:pm
Islamabad: At least two policemen were killed and 12 people, including eight policemen, were injured in a powerful explosion on Sunday targeting a police...

01/03/2022/1:57:pm
New Delhi: The situation in Ukraine's capital Kyiv under Russia-Ukraine War is deteriorating. Meanwhile, a strict advisory has been issued to the stranded Indians...

07/12/2021/8:30:pm
Basra (Iraq): At least four people were killed and several were injured in an explosion on Monday in the central part of the southern...

11/04/2021/9:51:am
Mogadishu: At least five people were killed and several others were injured in Saturday's Explosion in two cities of Somalia. Police said that a...

U.S. presidential election:winner is unlikely to be announced just hours after...