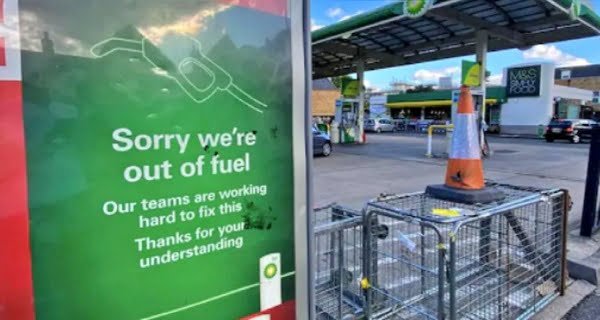 London: The fuel crisis in Britain is continuously deepening. In many parts of the UK, gas stations are closed due to the non-availability of oil at petrol pumps. It is reported that the British Army has been deployed to end the oil crisis in Britain. From Monday, army drivers will start trying to deliver oil.

According to a report in Daily Mail, soldiers will start delivering petrol from Monday to end the fuel crisis. Downing About 200 military drivers are being deployed in this task. However, motorists may have to pay a little more per liter at the pump. Industry experts say the crisis is worsening in London and the South East.

Britain is currently facing a huge oil crisis. Long queues of vehicles are seen at petrol pumps in many parts of the UK and in many places there are no fuel boards. In fact, the UK government is planning to enlist the help of the military to help deal with the fuel supply problem caused by a shortage of truck drivers, so that they can be employed if needed. Vehicles queued up at fuel stations amid fears of fuel shortage.

Warning to the world, new Covid mutant found in America can even dodge the...

02/09/2021/9:30:pm
New Delhi: The vaccine is considered to be the safest way to protect against the corona epidemic. Even though the vaccine may not stop...

13/08/2020/11:12:pm
Bhopal: Under the government announcement and UGC guidelines, the Higher Education Department has issued a guideline to give general promotion to the students of...

05/09/2020/8:51:pm
Honor has launched two new smartwatches named Honor Watch GS Pro and Honor Watch ES. In both these devices, the user will get heart...

11/03/2021/8:48:am
Today, on March 11, Shivaratri (Mahashivratri) is being celebrated with pomp across the country. This festival is very important for Hinduism. This day is...

Australia gave a big blow to China, canceled the contract on the basis of...