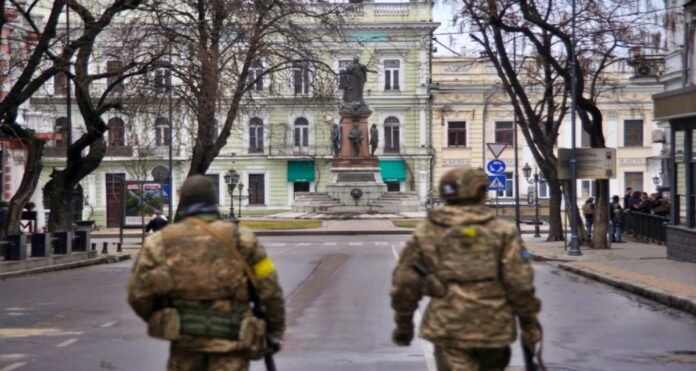 Kyiv: The US and its allies earlier warned the international community that Russia’s so-called military operation in Ukraine is likely going to transform into a long and protracted war.

Now, the southern Ukrainian city of Odesa has become the Centrepoint of Russia’s military objectives as well as the Ukrainian resistance.

Residents of Odesa are warming up to the fact that their city is no longer the safe haven for civilians fleeing war from the cities of Mykolaiv, Kherson and other major southern cities, some of which have already fallen to the Russians while some have turned into an active warzone.

Speaking to the Ukrainian news agency the Kyiv Independent, residents said that they are ready to defend the Ukrainian port city which was until a few months ago a bustling tourist hotspot and attracted large numbers of travellers but has now turned into a city getting ready for war.

If Putin succeeds in capturing Odesa and Mariupol, it will allow him to firstly build a land border between the so-called republics of Donetsk, southern Ukraine and the Crimean peninsula; secondly, it will also allow him to cut Ukraine from the Black Sea.

Capturing and conquering Odessa will be another symbolic win for Russian President Vladimir Putin.

Odesa was Czarist Russia and Soviet Russia’s largest seaport and was founded during Russia’s imperial expansion in the late 18th century.

Capturing Odessa will also add to the increasing global food crisis as the port is a major gateway for grain shipments.

It is understandable that Russia still wields influence over the residents of Odessa.

A report by Kyiv Independent said that some Odesa residents believe that Russian sympathisers in Odesa are detrimental to Ukraine’s resistance.

Once a university lecturer, Vasyl Dyachenko, now a Territorial Defence Unit fighter, said that Russian sympathisers are ready to stab them in the back.

“Half of the population here is pro-Russian. Many of them publicly changed sides, some laid low. Their sabotage and reconnaissance groups are ready to hit us in the back,” Dyachenko was quoted as saying by the news agency.

Odesa is also a target for Russian forces because it is also an avenue for Ukraine’s allies to send lethal supplies and weapons.

On Tuesday, the Russian army attacked a shopping centre and a warehouse with more than seven missiles killing one and injuring five.

A prized jewel for both Russians and Ukrainians, it is likely that Odesa may face severe attacks similar to what Mariupol is currently facing.

WHO: Political and religious programs are the cause of increasing cases in India

14/05/2021/9:59:am
New Delhi: The World Health Organization (WHO) has said that according to the recent assessment, there can be many reasons for the increasing cases...

Iran begins construction of underground nuclear center amid tension from US

18/12/2020/6:48:pm
Dubai: Iran has started construction of an underground nuclear center in Fordo amidst ongoing tension with the US over its nuclear program. 'AP' has...

Corona case is coming again in China, restrictions are increased

Why Africa is Divided Over the Russia-Ukraine War?

From tech visionary to social media king, nothing could stop Elon...