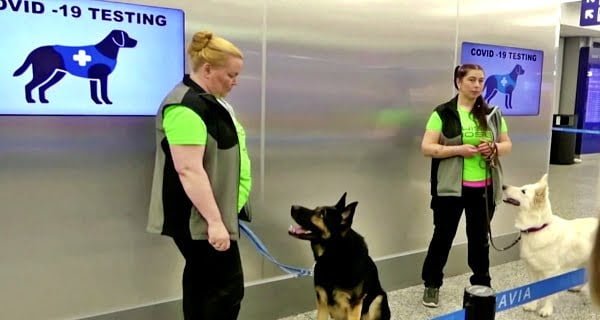 London: Corona virus-infected people have a different smell from the body which trained dogs can detect accurately. This claim has been made in new research conducted in Britain. The London School of Hygiene and Tropical Medicine (LSHTM) has done this research in collaboration with the Charity Medical Detection Dogs and Durham University.

It has been described as a first-of-its-kind study involving the training of dogs, odor analysis and modeling. Researchers found that specially trained dogs can detect disease with 94.3 percent sensitivity and 92 percent accuracy.

According to a research paper published last week, dogs are able to detect infections in individuals with no symptoms, as well as differentiate between corona virus types (strains). In addition, they can also assess the level of infection. Professor James Logan, head of the Department of Disease Control at LHTM, said their investigation could be hampered for some time in view of the threat of new types of viruses entering the country. In such a situation, these dogs can play an important role. He said that there is a need to study now to find out whether dogs can replicate these results in the real environment. This discovery is very encouraging.

Medical detection dogs team trained
The advantage of using this method would be to detect uncontrolled infectives with unprecedented speed and accuracy in a large group of people. Researchers reported that the dogs were trained by a team of medical detection dogs to identify Covid-19. During this time body odor was used which was sent by the National Health Service (NHS) in the form of masks, socks, and T-shirts. He said the LSHTM team collected 3,758 samples in the process and sent 325 infected and 675 infection-free samples for examination.

Why is the government preparing to change the definition of forest? learn everything

MiG-21 crash in Suratgarh, Rajasthan, fireball made as soon as it took off

05/01/2021/10:21:pm
Jaipur: Indian Air Force's MiG-21 aircraft crashed on Tuesday evening in Suratgarh area of ​​Rajasthan. However, the pilot ejected himself safely during the accident...

Now you will be able to do PG in ‘Hinduism’, Banaras Hindu University started...

20/01/2022/8:41:pm
Varanasi: Banaras Hindu University has started a postgraduate course in 'Hinduism'. The university has described it as the first course of its kind in...

Weird fatwa by Maulana of Bangladesh, why the use of ‘Haha’...