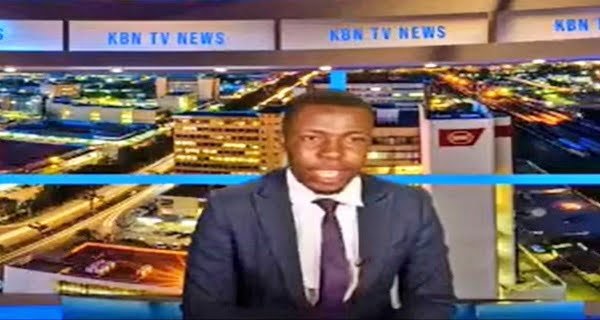 Zambia: In today’s time, people use mobile phones to know the news of the country and the world, but even today there are many people who like to watch news leisurely on TV. The news is told in the news briefs on the channels, seeing which the whole situation is understood. Sometimes the channels that show the news become a news. Like many times people start abusing each other in the debates in live TV shows, sometimes they start fighting. But, the story about which we are going to tell today is very strange. Whose video is also becoming increasingly viral on social media.

What is the matter?
In fact, recently a Zambia TV anchor started telling him in the middle of a live news bulletin that the channel was not paying him salary. Kabinda Kalimina, the news anchor of KBN TV has created quite a stir recently. He has accused the channel of not paying the salaries of the employees and withholding the salary. While reading the news headlines, he suddenly raised the issue of salary in the middle and started discussing it. His move shocked the audience as well as the office people. Kabinda Kalimina has also made serious allegations against the management of the channel.

Gets emotional for not getting salary
Kabinda Kalimina said in the on-air show that, ‘We are all human beings apart from the news and we should get the salary. Unfortunately, KBN TV did not pay us the salary. Referring to his colleagues, he said that no one, including me and Sharon, has received a salary. We should get the salary. Actually, the anchor had not received a salary for the last several months. The mention of which he became emotional and started speaking in the live bulletin itself.

The channel told the anchor a drunkard
Soon after this incident, the channel fired Kabinda Kalimina from her job. Also, KBN TV’s chief executive, Kennedy Mmwe, has described the anchor as an alcoholic. Also said that this is a way to get publicity. On the other hand, Kabinda Kalimina has shared the video of this incident on Facebook and wrote, ‘Yes I did this on Live TV because most of the journalists are afraid to speak, but that does not mean that journalists should not speak about it. ‘ As soon as the video goes viral, many people raise their voice in support of the employees of KBN TV.

11/09/2020/3:06:pm
East Longmeadow, Mass., United States:  After an exhaustive two-year process, a University of Arizona Health Sciences research team have announced the publication of their work, a...

25/05/2021/9:01:pm
London: Corona virus-infected people have a different smell from the body which trained dogs can detect accurately. This claim has been made in new...