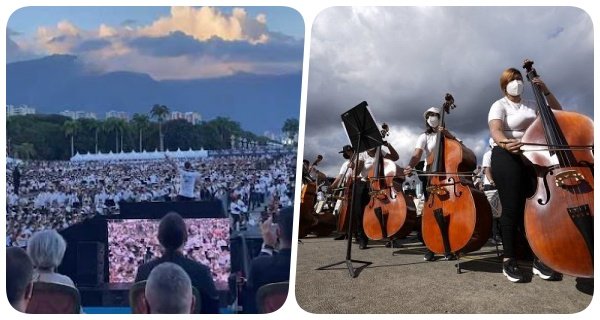 “Today, Venezuela set a Guinness record for [a concert performed by] the largest symphony orchestra … Previously, the Guinness record belonged to Russia, if Russia doubles its orchestra, so will we,” Maduro said on Saturday.

The previous record was set by Russian musicians in 2019 when an orchestra of 8,097 people performed Russia’s national anthem in St. Petersburg.

27/10/2020/8:54:pm
New Delhi: Ankhi Das, Public Policy Head of Facbook India, has left the company. This information is provided by Facebook. A statement from the...

Aarti Darshan to be done online in Corona era

19/08/2020/9:15:pm
New Delhi: This year due to the Coronavirus epidemic, Bappa will appear online during the Ganpati festival. Most of the Puja pandals have made...

05/09/2020/10:41:am
Lahore: Pakistan Muslim League-Nawaz Vice President Maryam Nawaz and 300 workers of his party filed a case on Friday in Terrorism charges for alleged...