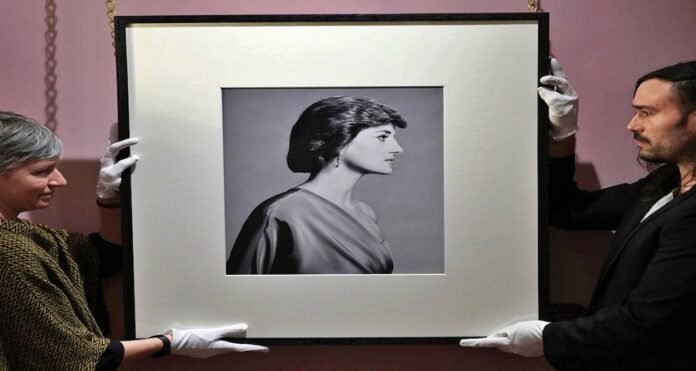 This never-before-seen portrait of the late Princess Diana of Wales is on display in a new exhibition titled ‘Life Through a Royal Lens’ at Kensington Palace in London. This simple yet elegant, black and white photo was placed before the public on 4 March. Diana was about 27 years old when this photo was taken. In this photo, Princess Diana is wearing an off-the-shoulder gown and teardrop earrings.

According to a press release from Historic Royal Palaces, Princess Diana’s decision to have David photographed reflects her desire to establish a new photographic identity for herself. Which is quite different from the royal paintings drawn in the past.

The comparison of this photo, which remained with the photographer till now, started very fast with the photo of Kate Middleton. On whose 40th birthday in January, Kensington Palace released three new photos. In one of the photos, Kate can be seen with three children and Princess Diana’s eldest son, Prince William. She is wearing a white dress and diamond and pearl drop earrings, which were earlier with her mother-in-law.

These photos were taken by Paolo Rovers at Kew Gardens in London last November and will be included in the permanent collection of the National Portrait Gallery, of which Kate is a patron. Kate is already shouldering the heavy responsibility of following in the footsteps of a big personality like Diana. Shortly after her engagement to William in 2010, she told journalist Tom Bradby that “I’d obviously love to meet her and she’s clearly an inspirational woman.”

Security assistance given to Pakistan by America still suspended: Pentagon

25/05/2021/10:22:am
Washington: The Pentagon said on Monday that the security assistance to Pakistan that was suspended by former President Donald Trump's administration is still suspended....

Kailash Vijayvargiya confessed, spent on this seat along with spending money and setting

24/06/2020/11:20:am
Indore: After the audio of CM Shivraj Singh, who exposed the demise of Kamal Nath government, now BJP leader Kailash Vijayvargiya also created a...

31/01/2022/9:30:am
New Delhi: A horrific road accident has occurred in Kanpur Bus Accident, Uttar Pradesh. Six people have lost their lives in this accident. While...

China: Two ships collided at the mouth of the Yangtze River, 3 killed, 5...

14/12/2020/7:28:pm
Beijing: Three sailors were killed when two ships crashed at the mouth of the Yangtze River in China, while rescue workers are also searching...

Effect of first dose of Covishield diminishes at 16 weeks in...