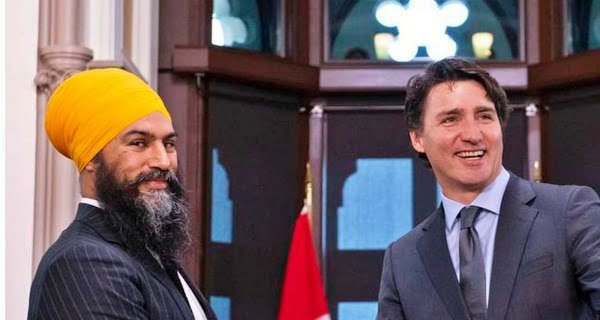 Toronto: Justin Trudeau’s Liberal Party got the most seats in the Canadian elections, but it is far from a majority. Despite this, he would easily become the third Prime Minister of Canada. Jagmeet Singh’s New Democratic Party (NDP) will help him in this. Trudeau got 156 seats in the 338-seat lower house. For the majority, it needs 14 seats. At the same time, the NDP has 27 seats, which will support the Liberal Party. In such a situation, Jagmeet Singh of Indian origin will prove to be the kingmaker in the formation of the government. This time 17 Indian diaspora have won the elections.

Punjabi community raised flags in Canada
This time 16 Punjabis out of 41 have won in Canadian elections. At the same time, 21 Punjabi women had also entered the electoral fray, out of which only 6 got the victory. Defense Minister Harjit Singh defeated Sukhbir Gill of the Conservative Party from Vancouver South. Diversity Minister Bardish Chaggar has retained the Waterloo seat, while Public Services Minister Anita Anand has retained the Oval seat. Harjit Sajjan, Anita Anand, and Bardish Chagar, who won the election, were also included in the former cabinet.

Hoshiarpur Sting in Canada
This time too, Hoshiarpur including Punjab has become proud again after winning the election of 4 MPs belonging to Hoshiarpur in Canada. Where two daughters of Hoshiarpur MP Ruby Sahota and Anju Dhillon (Gadhdiwal) have become MPs again. At the same time, Lt Col Harjit Singh Sajjan, a resident of village Babeli (Mahilpur), won the election for the third time. Sukh Dhaliwal has become an MP from Surrey-Newton for the 5th time.

Delta + variant of Corona ‘most infectious’, spread rapidly, WHO warns