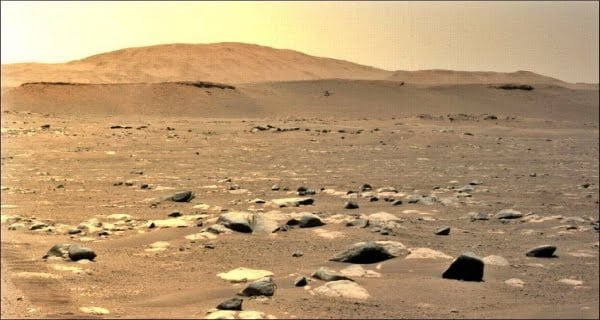 Washington: The US space agency NASA’s Ingenuity Helicopter has made a successful flight to Mars for the third time. During this time, the helicopter went to a height of 16 feet and covered a distance of 164 feet. The maximum speed of the helicopter during the flight was 6.6 feet per second, which is four times more than the earlier speed. NASA said that a video clip of this entire campaign will be released in the coming days. Dave Lavari, Program Executive of the Ingenuity Project, said that today’s flight was the same as what we had planned and yet it was nothing short of amazing. This 80-second flight has been shot through Mastcam Z in NASA’s Perverence Rover. The same rover had brought this helicopter weighing four pounds with NASA.

NASA told about the flight that if the ingenuity flies too fast, the flight algorithm cannot track the characteristics of the surface. Ingenuity flights are challenging due to varying conditions from Earth. The biggest obstacle in this is the atmosphere of Mars. Which is much thinner than our density here. NASA said that they are now preparing for the fourth flight. In every flight, an attempt will be made to set a higher altitude and distance. Ingenuity took its first flight on 19 April. During this time he was blown to a height of 10 feet from the ground.

Indian student gave name to Ingenuity
The need for rotorcraft on Mars is because the unseen-unknown surface there is extremely rugged. Orbiters circling in Mars’s orbit can see clearly only from a height to a limit. At the same time, it is not possible for the rover to go to every corner of the surface. In such a situation, a rotorcraft is needed that can fly to difficult places and take high-definition pictures. The 2 kg Ingenuity was named by India’s student Vanija Rupani through a competition.

In United States, people held silent rallies on the anniversary of Floyd

26/05/2021/9:47:pm
Minneapolis: On Tuesday, the first anniversary of the death of the black George Floyd, who was strangled by a white police officer, people observed...

The farmer hanged himself on the tickeri border, wrote in the suicide note –...

07/02/2021/12:33:pm
New Delhi: In the midst of the ongoing Kisan Andolan agitation against agricultural laws, another farmer committed suicide on Sunday and gave his life....

05/08/2020/9:06:pm
Mumbai: South's superhit film Bahubali fame is good news for the fans of actor Rana Daggubati. During the lockdown, Rana got engaged to his...