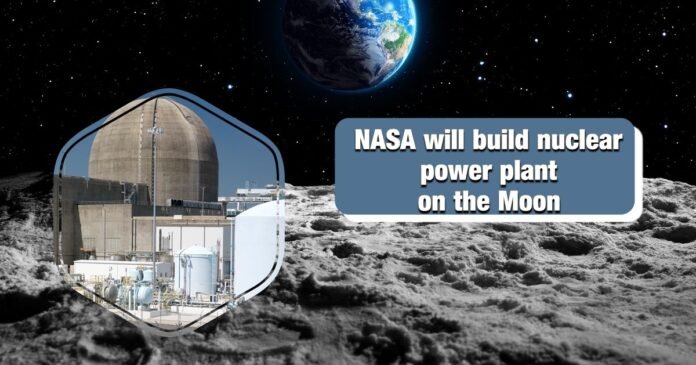 NASA: America is preparing to send humans once again to the Moon. But this time the moon travelers will not be sent for a few hours, but NASA intends to make a long presence there. To stay on the moon temporarily, many problems will have to be faced. This will also require energy, which will not be sufficiently met by sunlight on the Moon. That is why NASA has announced to work on a special plan. NASA is planning to set up a nuclear power plant on the Moon in the next 10 years.

Went on the moon for a while before
It is worth noting that before this, people who went to the moon through NASA’s Apollo campaign did not stay there for a long time. But now that the intention is to live and work on the Moon, astronomers will need a permanent energy source that can meet the need for abundant energy.

Nuclear fission most promising option
While many alternatives are being considered for energy, NASA has for years believed that nuclear fission may be the most viable energy option for future moonwalking colonies. And now NASA has also started work to implement this. Jim Reuters, the associate administrator for NASA’s Space Technology Mission Directorate (STMD), says abundant energy will play a major role in future space missions.

Proposals have been sought for this system
For the past several years, NASA has been assessing the possibility of nuclear fission on the Moon. In this project called Kilopower, NASA is doing research in collaboration with the US Department of Energy (DOE). Both have asked US industry partners to submit design proposals for a nuclear fission power system that can run on the Moon and be launched and delivered to the Moon.

What its capabilities should be
According to NASA, a small, lightweight fission system that can operate on the surface of a lunar lander or rover should be capable of providing 10 kilowatts of electrical energy to meet the average household energy requirements there. In this, along with running the life support system on the Moon, it will be used to charge the Moon’s rover and meet the needs of scientific experiments there.

How much energy is needed
According to NASA and DOA, these systems of the future will have to supply 40 kilowatts of energy, which will provide energy to 30 homes for 10 years. Along with this, there should also be enough energy on the moon that can make a human presence there possible. This system can also work on Mars in the future, which is the next goal of NASA, on which a lot of work is going on now.

A rocket launch can also get energy in future
Not only this, this NASA power plant can be helpful in developing up to the nuclear propulsion system in the future, which will be able to deliver fast missions to Mars in the future. So far, NASA and DOA have had some success in past experiments, but testing it on the Moon itself will be a big challenge.

NASA’s proposals for this project can be received by February next year. After this, the design of this system will be finalized. And it is expected that a decade later it will be launched. Scientists believe that with the arrival of energy, it will be possible to solve many problems on the Moon, which seem impossible right now.

31/07/2021/9:51:am
Beijing: Customs officials in China have seized a large consignment of world maps showing Arunachal Pradesh as part of India. These maps had to...

16/08/2020/8:00:pm
Mumbai: The Meteorological Department has issued a 'Red Alert' for sporadic heavy rains at isolated places in Pune and Satara districts of Maharashtra on...