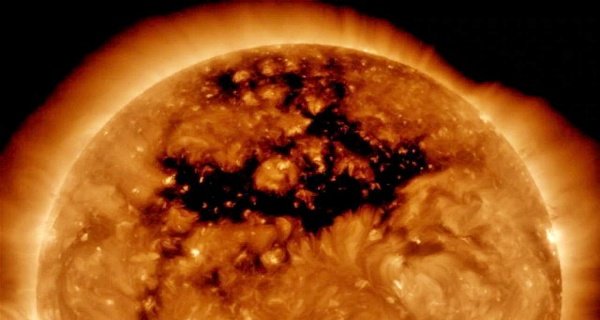 NASA: Scientists of the US space agency NASA, which monitors the space weather, have given surprising information. NASA scientists have warned that a large hole has been seen on the surface of the Sun, the corona. There is a continuous shower of charged particles from this hole. These particles are likely to hit Earth’s atmosphere later this week.

NASA’s Solar Dynamic Observatory has detected a large coronal hole in the Sun’s outer atmosphere. According to the report of Spaceweather, due to this, there may be some minor geomagnetic movement in the Earth’s magnetosphere. Aurora effect can be generated in the polar regions due to the current moving towards the Earth. Due to this, green light can be seen in the sky of the North and South Poles.

Bill Murtagh, a program coordinator at the National Oceanic and Atmospheric Administration’s Space Weather Prediction Center, said that we have seen very little movement in the sun over the past several years. This mostly happens during solar minimum, but now we are moving fast towards a solar maximum. This will be the fastest in the year 2025.

Due to solar storms, the outer atmosphere of the Earth can be heated, which can have a direct effect on satellites. This can cause interference with GPS navigation, mobile phone signals, and satellite TV. The current in power lines can be high, which can also blow transformers. Although this is rarely the case because the Earth’s magnetic field acts as a protective shield against it.

Generally, there is magnetic activity around the Sun, due to which solar storms occur. There are holes because of those solar storms, but they automatically end. But, this hole made on the Sun, which is increasing continuously, is causing problems for scientists.

Impact on GPS navigation
Solar storms can overheat the Earth’s outer environment, which could have an impact on satellites. GPS mapping, mobile phone transmissions, and satellite television signals could all be impacted. Power lines can carry a lot of currents, which can cause circuits to explode out. The Earth’s magnetic field, however, serves as a form of protection against it, therefore this is rarely the case.

18/09/2020/12:42:am
Luxembourg:  As remote production for sports ramps up around the globe, SES is providing broadcasters with a newly opened, full-service sports and events facility in...

Climate crisis is getting worse by eating large amounts of meat, shocking revelations in...

Loans will be easily available in the government’s ECLGS scheme, the scheme is extended...

04/11/2020/10:59:pm
New Delhi: The Central Government has decided to extend the Emergency Credit Line Guarantee Scheme (ECLGS) for one month in view of the festive...

Devuthani Ekadashi 2021: know the right time and method of fasting

14/11/2021/9:44:am
New Delhi: Kartik, the holy month of worshiping Lord Vishnu, holds special significance from a religious point of view. Because Goddess Lakshmi and Lord...