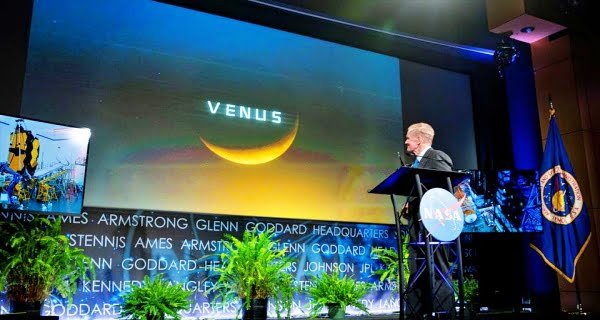 NASA: In the decades-long exploration of our solar system, one of our neighboring planets, Venus, was always overlooked or not much effort was made to know about it, but now things are about to change. In a recent announcement made by NASA’s Solar System Exploration Program, two missions have been given the green signal and both of these missions are for the planet Venus. These two ambitious missions will be launched between 2028 and 2030.

This marks a significant change for NASA’s planetary science division as it has not sent a mission to Venus since 1990. This is exciting news for space scientists. Conditions are unfavorable on the planet Venus. It has sulfuric acid in its atmosphere and surface temperatures hot enough to melt lead, but this hasn’t always been the case. It is believed that the origin of the planet Venus was exactly the same as the origin of Earth, so what happened that the conditions there turned opposite to the earth?

Uneven growth is happening in the inner core of the earth – research suggested
On Earth, carbon is mainly trapped within the rocks, while on Venus it has moved into the atmosphere, making up about 96 percent of the carbon dioxide in its atmosphere. This resulted in a very rapid greenhouse effect, causing surface temperatures to drop to 750 Kelvin (470 °C or 900 °F).
The history of the planet will provide an excellent opportunity to study the greenhouse effect and understand how it is managed on Earth. For this, such models can be used in which the extreme conditions of Venus’s atmosphere can be prepared and the results can be compared with the current conditions on Earth.

Most stars were formed 8-10 billion years ago, Indian research told why then there was a decrease
However, there is a reason for the extreme surface conditions that kept Venus away from planetary exploration missions. The maximum temperature here is as high as 90 bar (about as much as the flow of water below one kilometer). This pressure is such that it can destroy most of the landers in an instant. The missions that have gone so far to Venus have not gone according to plan. Most of the exploration done so far has been done by the Soviet Union between the 1960s and 1980s. Some notable exceptions are NASA’s Pioneer Venus mission in 1972 and the European Space Agency’s Venus Express mission in 2006.

How pollution in space has become a threat to space stations?
The second mission will be known as ‘Veritas’ which is an acronym for ‘Venus Emissivity’, ‘Radio Science’, InSAR’, ‘Topography’ and Spectroscopy’. This will be a planetary mission of even higher standard. The orbiter will carry two instruments to map the surface and complement the detailed infrared observations from DaVinci.

Its first stage will be a camera looking at the boundaries of different radio waves. It can see beyond the clouds of the planet Venus, which will allow the investigation of atmospheric and plains structure. The second instrument is radar and it will use a technology widely used on Earth observation satellites. The high-resolution radar images will produce a more detailed map that will probe the origins of Venus’s surface.

These missions will add further evidence to the theory that the surface of Venus was completely melted and re-formed 500 million years ago. This would also explain the lack of meteorite impacts on the surface, but so far no evidence has found a volcanic lava surface that may have formed as a result of surface re-formation.

It is encouraging that NASA has included Venus in its planetary missions. The possibility of many budding astronauts sending a human there is not seen in the near future. However, the information we get from this largely forgotten sister of Earth is very valuable to our understanding.

Going to marriage will now be expensive, the quarantine will have to happen

26/06/2020/8:23:pm
Wardha: Demonstrating attendance at wedding ceremonies that have held the couple together for a lifetime with the sacred union(marriage) of two hearts is now...

24/11/2020/10:31:am
Geneva: A committee of human rights experts affiliated with the United Nations has said that Carlos Ghosn, a former top official of Renault-Nissan, Taken...

Japan imposed a ban on entry of foreigners

Pakistan team to visit England even after 10 cricketers are found to be Corona...

24/06/2020/8:02:pm
Islamabad: Seven more players of Pakistan cricket team were found Corona positive on Tuesday. In this way, 10 players from the team going on...