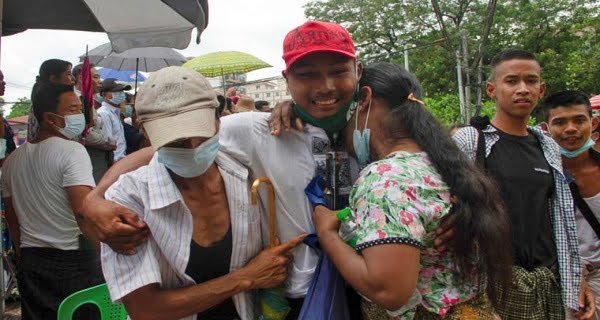 Yangon (Myanmar): Myanmar’s military government on Saturday released more than 23,000 Prisoners, including three political prisoners, on the occasion of the traditional New Year. At the same time, the military leader, the main source of the coup in February, said that he will attend the regional conference later this month. It is not yet clear whether those released include pro-democracy activists arrested for opposing the coup.

Government broadcaster MRTV said that Junta chief Senior General Min Og Helang has released 23,047 prisoners, including 137 foreigners, and will be sent out of Myanmar. He also reduced the term of punishment of other people. Protesters continue to crack down on protesters seeking to hand over the reins of the country to the elected government. There are reports in social media that three people were killed in Mogok city on Saturday.

According to the Assistance Association for Political Prisoners, which keeps an account of the arrests and casualties in the country, 728 demonstrators and civilians have been killed at the hands of the security forces since the coup. The group says 3,141 people are in custody, including the country’s leader Aung San Suu Kyi.

Dr. Anthony Fauchi will be the Chief Medical Adviser: Biden

04/12/2020
Washington: Newly elected President of the United States Joe Biden said that Dr. Anthony Fauchi will be the Chief Medical Advisor and will be...

China sets target for corona vaccination, plans to vaccinate 70-80% of population by mid-2022

13/03/2021
Beijing: China has targeted to vaccinate 70–80 percent of its population from coronavirus infection by the end of this year or by the middle...

29/07/2020
Ambala: The first batch of five Rafale jets landed in Ambala Wednesday afternoon. It was a historic moment as they were greeted with water...

General elections in New Zealand on Saturday, will also vote to legalize marijuana-euthanasia

15/10/2020
Wellington: New elections are going to be held in New Zealand on Saturday and pre-poll surveys indicate that Jasinda Arden may hold the post...

02/07/2020
The World Health Organization (WHO) has shared important information among the growing outbreak of Corona virus. The WHO warned that the condition of corona...