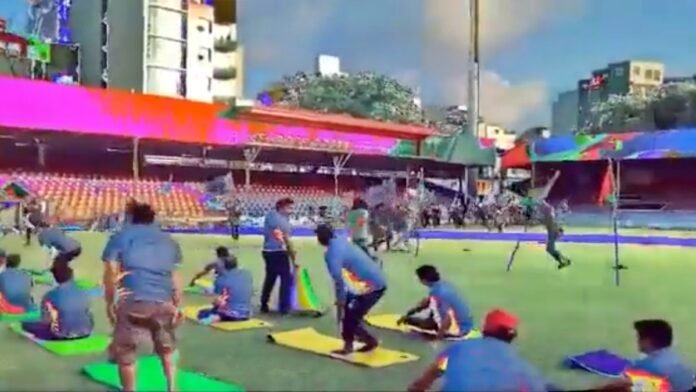 Male: A mob attacked an event on the occasion of International Yoga Day in Male, the capital of Maldives, on Tuesday. During the Yoga Day program organized by the Maldivian government and the Indian Cultural Center, a fierce mob misbehaved with the people doing yoga. Its video is being shared a lot on social media.

The yoga event was held this morning at the National Football Stadium in the capital Male. Then the mob attacked there. To control the miscreants, the police had to release tear gas shells. The agitated crowd attacked when the people present in the stadium were doing yoga in the morning.

The policemen stationed on the spot first fired tear gas shells to control the crowd carrying flags in their hands, but the police had to use force when the situation was not under control.

The Ministry of Youth, Sports, and Community Empowerment of Maldives organized a yoga and meditation session in collaboration with the Indian Cultural Center on Tuesday. In a video viral on social media of the incident, it has been said that the attackers are attacking the yoga practitioners and policemen are intervening. Some had sticks in their hands and some were intent on beating them with sticks or flags.

President Solih ordered an inquiry
Expressing concern over the incident, Maldivian President Ibrahim Mohamed Solih said that an inquiry has been ordered into the incident. He tweeted and said that our government is very worried about this incident. Those responsible will soon be brought under the purview of the law.

In the midst of emergency in Sri Lanka, entire cabinet resigned at midnight, what...

Changed name of film Prithviraj, tickets can be booked from today, see poster

29/05/2022/9:55:am
Mumbai: Bollywood actor Akshay Kumar's much-awaited upcoming film 'Prithviraj' is all set to release in theatres. There was some controversy regarding the name of...

24/09/2021/9:43:am
Washington: According to the news of the morning, the US tour of Prime Minister Narendra Modi has started today and met US Vice President...

Progress, prosperity, and partnership are the basis of India-Japan relations: PM Modi

Vaccination in America delayed, top officer, said – speed may be...

Now use of wild animals in the circus, Marine Park will...