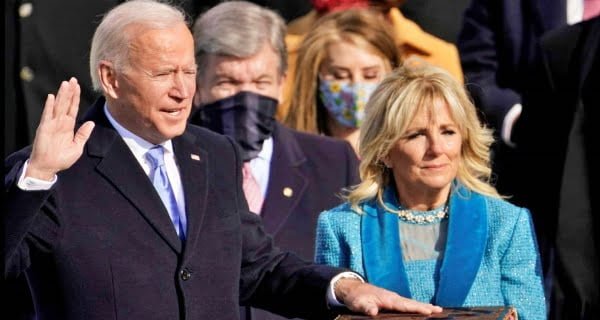 Washington: US President Joe Biden on Wednesday took the oath of office as President, promising to improve relations with US partners and increase partnership with the world once again. In his maiden speech as the 46th President of the country, he said that the country had passed the test and emerged strong. The 78-year veteran leader of the Democratic Party said in his speech, “We will be strong and trusted partners in the field of peace, progress and security.”

As everyone expected President Joe Biden to take over power, many of the major decisions of former President Donald Trump would be overturned, and that is exactly what happened. After taking oath as president, Joe Biden took over his work directly in the Oval Office and got into quick action.

Moving towards this, the US Embassy in Israel has now changed the name of its Twitter handle. The name on the Twitter handle during the first Trump administration was ‘US Ambassador to Israel’, now changed to ‘US Ambassador to Israel, Gaza and West Bank’. It is clear that the Trump administration had previously recognized them as an Israeli place, but now the king has changed and now the result is also changing.

Let us tell you that President Biden has elected veteran diplomat Daniel Smith to the post of acting foreign minister in his government. Biden wants Anthony Blinken to serve as foreign minister and is awaiting approval from the Senate. Significantly, Joe Biden has been sworn in as the 46th President of the United States of America and Kamla Harris of Indian origin along with him as Vice President.

03/07/2020
Bhopal: The vicious husband's surprise fraud was revealed 4 months after his marriage to the young man who came in contact with the Matrimonial...

27/07/2020
Lucknow: Several leaders, including Uttar Pradesh Congress President Ajay Kumar Lallu, were arrested on Monday in protest against the ongoing deadlock between the state...

22/06/2020
New Delhi: Gold has reached a record high in the domestic and international markets amid the Corona virus crisis. In the domestic market, 24...