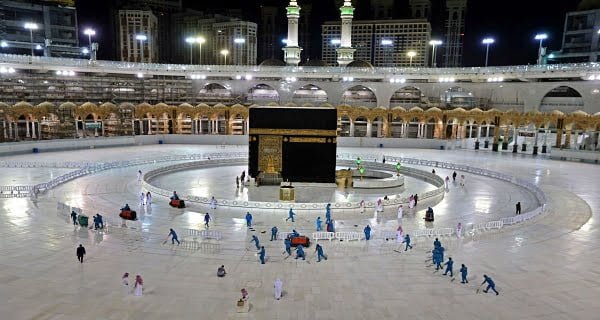 Jeddah: During this time in the world, there is a huge crisis regarding Corona Virus. In many countries of the world, rules have been made to visit the major religious places in many places. In such a situation, the Ministry of Haj and Umrah of Saudi Arabia issued a statement before Ramzan saying that, this year, only those people who come to perform Umrah in Saudi Arabia are the only ones Permission will be given to people who have been vaccinated by the Coronavirus.

The report states that, the implementation of this policy will increase the operational capacity of Masjid al-Haram during Ramadan. There will be similar rules for Masjid-e-Nabvi in ​​Medina. This policy will start from Ramadan, but it is not clear how long it will continue.

According to a report, Saudi Arabia has reported more than 3,93,000 cases of corona virus infection. So far, around 6,700 people have died due to Corona’s grip. So far, 5 million people have been given Corona vaccine supplements in the country. Last year due to the Corona crisis, the lowest number of people in modern history reached for the Hajj.

04/12/2020
Jerusalem: The Iranian government has asked its citizens to refrain from traveling to the United Arab Emirates (Gulf Arab states) and Bahrain in anticipation...

16/08/2020
Lucknow: Former cricketer and cabinet minister in Uttar Pradesh government, Chetan Chauhan has died on Sunday due to a heart attack. He was 73....

25/09/2020
Seoul: North Korea leader Kim Jong Un said on Friday that South Korea's officer was shot and killed, saying he was "shocked" by this...

A big decision regarding railways: The government has restructured the railway board, direct impact...

04/09/2020
New Delhi: Historical decisions have been taken regarding railways in the cabinet meeting held under the auspices of Prime Minister Narendra Modi. The government...