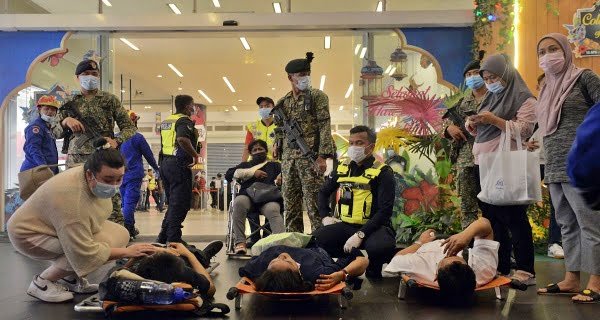 Kuala Lumpur: More than 200 people were injured (Crash) in a collision between two light rail trains (trains and trains featuring metro and trams) within a tunnel in Kuala Lumpur, Malaysia. The accident is the biggest accident in the 23-year-old metro system. Blood-soaked passengers are seen in photographs circulated on social media of the collision on Monday night and shattered glass all over. Transport Minister Wei Ka Seong told local media that the metro train collided with an empty test car inside the tunnel near the Petronas Towers, one of the highest twin towers in the country. There were 213 passengers on the train.

He said, “One train was going at a speed of 20 kmph and the other was going at a speed of around 40 kmph when this collision happened. Some passengers fell out of their seats due to a severe blow. ” Federal Territory Minister Annuar Musa tweeted on Tuesday that the condition of the three passengers remains critical. At the same time, more than 40 people have suffered serious injuries and another 160 have received minor injuries.

Prime Minister Muhyiddin Yasin has asked for a thorough investigation into the accident. Police said they suspected that some misinformation was given from the operational control center of the trains. A driver was driving the empty train but the passenger train was fully self-operated and controlled by the operational center. The accident has affected one of the three light rail lines connecting Kuala Lumpur and surrounding areas. Broadcast Malaysia Berhad, the company that owns the state-owned metro system, said train services resumed from Tuesday.

30/09/2020/10:18:pm
Islamabad: Pakistan Prime Minister Imran Khan has told the concerned authorities that he would like Pakistan Muslim League chief Nawaz Sharif to be in...

HaircutAtHome: Philips Introduces Hair Clippers for Men, Designed for an Easy and Even

15/08/2020/6:35:pm
Gurugram: Former cricketer and cabinet minister in UP government Chetan Chauhan's condition is very critical. Chauhan is placed on the life support system at...

New restrictions on Turkey, EU leaders raise concerns about activities in the Mediterranean

11/12/2020/4:08:pm
Brussels: European Union leaders on Friday morning approved the extension of sanctions against Turkey over the exploration of gas reserves in the Mediterranean from...