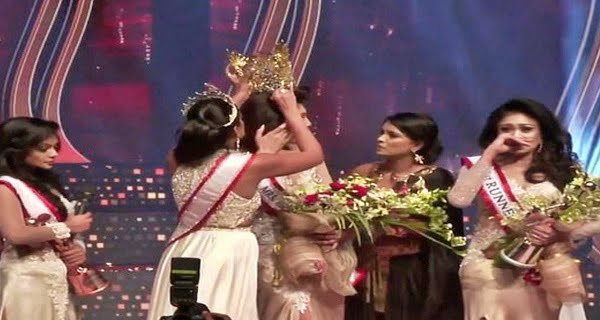 Colombo: The famous Beauty Contest of Sri Lanka, Mrs. Sri Lanka created a lot of ruckus during the competition. The crown worn by Pushpika De Silva, the winner of the beauty queen contest, was snatched by the current Mrs. World Caroline Jurie at the stage and said she was not entitled to it And she cannot wear the crown on her head because she is divorced. According to a report, while removing the crown, Pushpika suffered a head injury and had to shift to the hospital.

Let me tell you that this contest is a very famous competition in Sri Lanka. On Sunday, Mrs Sri Lanka program running in a theater in Colombo was being broadcast on the Sri Lankan National TV Channel and this sentence was completed during that time. The report states that the organizers of the event have confirmed that De Silva is not divorced.

By the way, the incident that took place during the contest was captured in the camera and now the whole matter is becoming viral on social media. As can be seen in the video, Caroline talks to Juri de Silva before she brutally removes the crown from her head and wears a close runnerup nearby.

It is being told that Caroline’s move caused De Silva tears and left the stage. The organizers later apologized to D’Silva and his crown was returned to him. Earlier, De Silva had won the title of Miss Sri Lanka in the year 2011.

15/02/2021
Islamabad: Sheikh Rashid Ahmed, the minister of the Pakistan government, who is often in the news after making odd statements, has once again given...

26/10/2020
Mumbai: Director Imtiaz Ali's film 'Jab We Met' made Kareena Kapoor, who appeared in the song, the greatest actress of that time. On the...

13/08/2020
New Delhi: The Supreme Court has extended the deadline for registration of these vehicles, giving a big relief to the owners of BS-IV vehicles....

02/04/2021
New Delhi: South Korean company LG Electronics is now preparing to exit the smartphone business and perhaps LG Mobile will soon be in the...