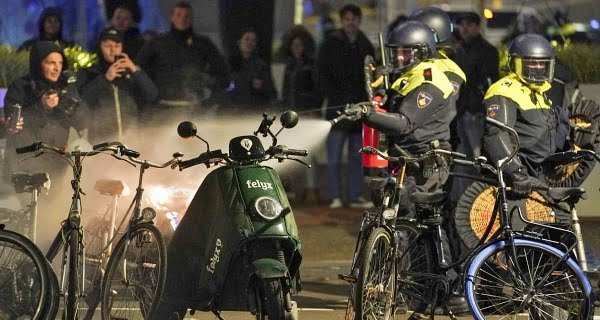 Utrecht: A large number of protests took place in the northern city of Utrecht after the lockdown was implemented amid increasing cases of Coronavirus infection in the Netherlands. State broadcaster NOS reported that hundreds of young people gathered at a square in Leuvorden, 140 km from Amsterdam, to protest the lockdown.

The NOS reported in its report that the riot police later dispersed the protesters. Media reports said ‘bars’ in the southern city of Breda remained open for longer than the stipulated time. In Utrecht, student Suzanne van de Werd expressed her displeasure at the new restrictions. He said, “It is very difficult for me to accept the lockdown. It’s so bad and it’s something that destroys my social life and the way I relax as a student.”

About 85 percent of the country’s population has been fully immunized, but on Thursday, the country’s Public Health Institute said 16,364 new cases were reported in 24 hours. These are the highest ever cases of infection in the country. More than 18,600 people have lost their lives due to the infection. Acting Prime Minister Mark Root announced a partial lockdown on Friday and said it would remain in place for at least three weeks. He said his government wanted to “hit the transition hard”. Significantly, this is the first lockdown imposed in a country in Western Europe after a new wave of infections started in some parts of the continent.

Facebook put a warning screen on Cardinal Juan’s video, know what is the whole...

18/08/2020/8:46:pm
Bhopal: By-elections in 27 assembly constituencies of the state can be held in October. For this, the state's Chief Electoral Officer Office has completed...

06/10/2021/2:57:pm
Mumbai:  The iconic Bappi Lahiri has had a multitude of his biggest hits with Saregama – India’s biggest and oldest music label. It shares a special...

Is danger of corona increasing again in-country? Positivity rate doubled in a week

27/07/2021/9:57:am
New Delhi: After wreaking havoc in the second wave of Coronavirus infection in the country, now something has reduced. In such a situation, restrictions...