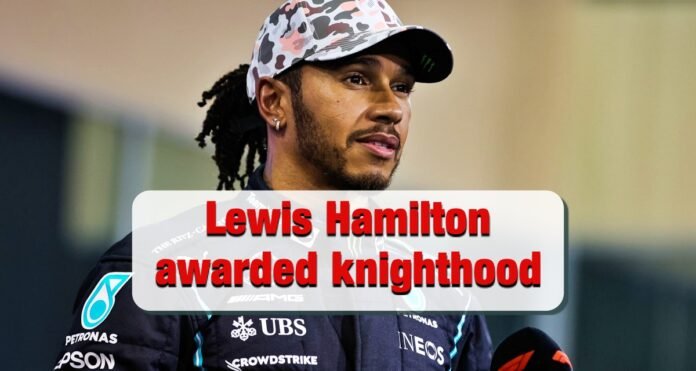 New Delhi: Seven-time Formula One champion Lewis Hamilton has been knighted for his services to motorsport. Recently, Hamilton missed out on a record eighth title after a tense final lap at the Abu Dhabi Grand Prix. Hamilton holds the record for most race wins with 103, while he is tied with German great Michael Schumacher in the seven drivers’ championship. The sport’s only black driver, 36-year-old Hamilton, was made a Knight Bachelor by Britain’s Prince Charles during an adornment ceremony at Windsor Palace in England.

Hamilton lost the 2021 title to Red Bull driver Max Verstappen on Sunday. Both were on points before the final race in Abu Dhabi, where the Dutchman overtook Hamilton in the final lap to win his first title. However, there was a lot of ruckus about this race.

Let us tell you that after the controversial end of this season’s Formula One title race, many veterans believed that Lewis Hamilton deserved to win the Abu Dhabi Grand Prix. The last race of the season in Abu Dhabi on Sunday saw several controversial race control calls and Red Bull’s Max Verstappen overcame Hamilton in the last lap to win. Hamilton’s dream of breaking Michael Schumacher’s record of seven world titles remained unfulfilled for the time being.

Hamilton was on his way to victory when a safety car hit the track after Nicolas Latifi’s car crashed on lap 53 of the 58-lap race. Verstappen’s new tires outweighed Hamilton’s old tires. Under the rules, the safety car should have moved on to the next lap, but this did not happen.

Does Mumtaz want to make a comeback in Bollywood? She is just waiting for...

14/09/2022/9:27:am
Bhopal: A senior forest department official said on Tuesday that cheetahs arriving by air from Namibia to Madhya Pradesh's Kuno-Palpur National Park this weekend...

When Remedisvir is necessary, how much the oxygen level falls?