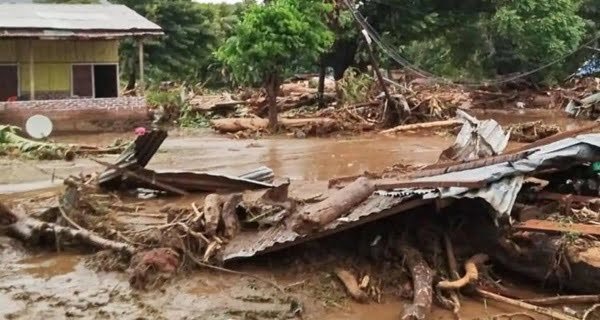 Jakarta: In eastern Indonesia, at least 55 people died and thousands were displaced due to rain-related accidents. The country’s Disaster Relief Agency said that more than 40 people were missing due to rain. Lenny Ola, the head of the local disaster agency, said that after midnight on Adonara Island in East Nusa Tenggara province, thousands of homes in Lamanelle village fell into the mud from the surrounding hills, causing the bodies of 38 people killed Rescuers have recovered and injured at least five people.

The National Disaster Reduction Agency said at least 17 other people died and at least 42 people were missing due to the floods. Agency spokesperson Raditya Jati said that the relief work was interrupted due to the power supply coming to a halt and mud and debris on the roads. He said that till Sunday night hundreds of people were engaged in relief work. At least six villages have been affected due to floods and landslides. The spokesman said that efforts are being made to get accurate information about loss of life and property during this period.

08/04/2021
New Delhi: Review of the progress of the meeting, CM Arvind Kejriwal directed the officials to expedite the allocation of flats prepared under the...

10/02/2021
Xiaomi is ready to launch its new smartphone Redmi Note 10 Series in India soon. The special thing is that an official announcement has...

Prime Minister of the United Kingdom came in contact with an infected MP, now...

16/11/2020
London: The Prime Minister of the United Kingdom Boris Johnson has isolated himself after coming in contact with an infected MP. Downing Street reports...

22/07/2020
New Delhi: The Insurance Regulatory and Development Authority of India (IRDAI) has approved the sale of Corona Kavach Policy to all insurance companies as...

25/06/2020
New Delhi: The Government of India is going to take big steps to make the Passport more secure. The government is working with the...