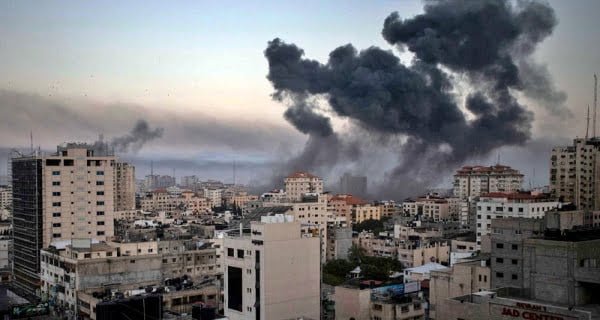 Jerusalem: Israel said that it was sending large numbers of troops to the Gaza border and asked 9,000 soldiers to be prepared for a possible ground attack in the Hamas-ruled region. This shows that both enemies are moving towards war. Egypt’s mediators arrived in Israel for ceasefire efforts but showed no signs of progress. The fighting intensified after communal violence in Israel on the fourth night as well. Jewish and Arab groups clashed in the city of Laud. The clashes took place despite the police order to increase its presence. This battle has led to horrific Jewish-Arab violence in Israel decades later.

Late-night rockets flew from Lebanon, posing a threat of a third party joining Israel’s northern border. A senior Hamas exiled leader, Saleh Aruri, told a London-based channel on Friday that his group had turned down a three-hour truce resolution to allow further talks for a full ceasefire. He said that Egypt, Qatar, and the United Nations are spearheading the ceasefire efforts. The Israeli military said on Friday that air and ground attacks were taking place in Gaza. Explosions in the outskirts of Gaza City created a smog of smoke in the sky. The attacks were so catastrophic that shouts of people were heard in the city several kilometers away. Prime Minister Benjamin Netanyahu said in a statement, “I said that we will charge a very heavy price from Hamas.” This is what we are doing and will continue to do so with tremendous force. ” The battle began on Monday when Hamas, claiming to have saved Jerusalem, began firing long-range rockets. Israel retaliated with several airstrikes. Since then Israel has targeted hundreds of locations in Gaza.

Gaza militants fired about 2,000 rockets into Israel, bringing life to a standstill in the country’s southern region. Many rockets were also fired, targeting Tel Aviv city. Gaza’s health ministry said about 100 Palestinians were killed in the attacks, including 28 children and 15 women, while 621 people were injured. Hamas and the Islamic Jihad militant group have confirmed the deaths of 20 people. However, Israel said that the number is much more than this. Seven people died in Israel, including a six-year-old boy. US President Joe Biden said that he had spoken to Netanyahu to end the fighting but also supported the Israeli leader. At the same time, on Thursday, Egyptian officials arrived for a cease-fire. Egypt often acts as an intermediary between Israel and Hamas and has played an important role in ending many previous battles. Authorities first spoke to Hamas leaders in Gaza and then to Israeli leaders in Tel Aviv.

Two Egyptian intelligence officials gave this information. Hamas exiled leader Ismail Haniyeh said he is in contact with Egyptian authorities. Despite the ceasefire efforts, Israel’s Defense Minister Benny Gantz on Thursday ordered an additional 9,000 troops to be sent to the Gaza border. The army’s chief spokesman, Brigadier General Hidai Zilberman, said troops were gathering on the Gaza border for a possible ground attack. He said that tanks, armored vehicles, and cannons are being prepared. Hamas has also given no indication of retreat. He fired several rockets throughout the day. Hamas said that it fired the most powerful rocket from Gaza. He also released a drone that Israel quickly killed.

Hamas military spokesman Abu Ubeda said his group was not intimidated by the ground invasion. He said that any attack would increase the chances of killing or taking hostages. This struggle is going on at a time when Eid is being celebrated for Muslims after the holy month of Ramadan is over. This round of violence began a month ago in Jerusalem where armed Israeli police remained stationed during the holy month of Ramadan and the threat of deportation of dozens of Palestinian families by Jewish refugees sparked protests and clashes with police. Police released tear gas shells and hurled grenades at the demonstrators at Al Aqsa Mosque.

01/09/2020/8:05:pm
London: Schools and colleges that had been closed since March finally reopened on Tuesday due to a lockdown imposed to deal with the global...