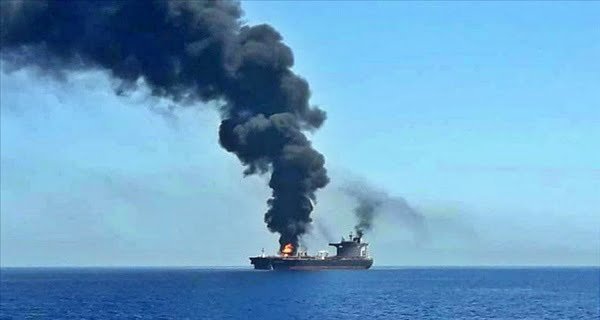 Tehran: The largest ship of Iran’s Navy caught fire in the Gulf of Oman and sank on Wednesday. The Fars and Tasneem news agencies reported that efforts to rescue the ship Kharg failed. The ship is named after Kharg Island, which is Iran’s main oil terminal. Fars said that the fire started at around 2.25 pm and firefighters tried to extinguish it. The ship sank near the port of Zask in the Gulf of Oman, about 1,270 km southeast of Tehran.

Images circulating on Iran’s social media showed marines wearing life jackets as they evacuated the ship and a fire broke out behind them. State television and semi-government news agencies describe Kharg as a “traineeship”. Fars has released a video of black smoke rising from the ship on Wednesday morning.

Iranian officials did not specify the cause of the fire in Kharg. This is the latest incident in connection with the mysterious blasts that started in 2019 targeting ships in the Gulf of Oman. The sinking of the Kharg ship is the latest naval accident for Iran.

During an Iranian military exercise in 2020, a missile accidentally hit a naval ship near the port of Jask, killing 19 sailors and injuring 15. In 2018, an Iranian Navy warship sank in the Caspian Sea.

21/08/2020/9:52:am
New Delhi: The pace of infection of Coronavirus in the country is growing rapidly. New cases of Corona are making new records every day....

11/02/2021/10:30:am
Washington: America's President Joe Biden reported that the Pentagon has formed a Task Force to deal with the challenge presented by China in the...

22/09/2020/12:28:am
Lausanne, Switzerland:  Philip Morris International Inc. (PMI) (NYSE: PM) today announced its participation in a series of events over the course of the United Nations...