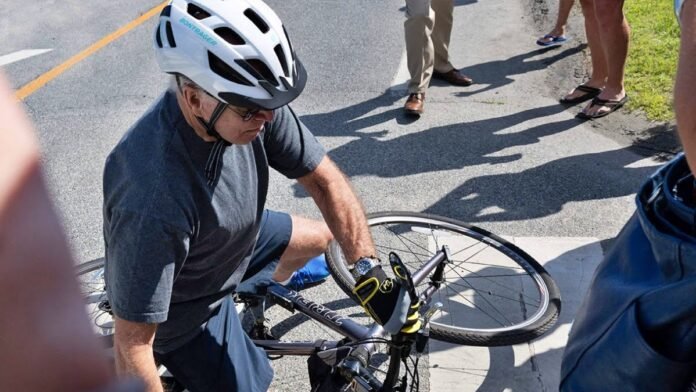 Washington: Former President Donald Trump has taken a dig at US President Joe Biden for cycling and falling. Trump wished Biden the hope of recovery, saying, ‘I will never ride a bicycle. Biden was recently seen cycling while on vacation in his home state of Delaware. During this, he had fallen due to slipping off his bicycle. Trump quipped, without naming Biden, “I hope he’s okay because as you know, he fell off his bicycle.” I promise you today that I will never go for a bicycle ride.

Former President Trump is on ‘Freedom Tour’ in America these days. During this, he took a jibe at President Biden at a rally. ‘The Hill’ has given this report quoting him. Let us tell you, after their defeat in the presidential election, Trump left the White House last year amid a big uproar at the US Capitol. He has been an attacker on Biden since his defeat.

US President’s foot was stuck in the pedal
On Saturday, Biden arrived with their wife Jill Biden for a holiday at Rehoboth Beach in Delaware state. Here he also did a bicycle. Many other people were also cycling with him. Also, there was security personnel. While cycling, as soon as he stopped at one place, his foot got stuck in the pedal and he stumbled and fell.

On this, the guards posted under his protection immediately surrounded him and helped to lift him. When Biden was asked how he fell, he said that the pedal leg of the bicycle was stuck. He also said that he did not get any injury and he is fine.

Biden is the oldest leader to hold the presidency in America. The 79-year-old Democrat leader took the oath of office on 20 January 2021. He won America’s power by defeating Republican candidate Donald Trump.

Such videos of Biden have come on many occasions. In this, they are actually falling asleep while speaking and forgetting the names of the people. Recently, while talking to the Indian Prime Minister Narendra Modi, he almost fell asleep.

US released the list of terrorist organizations, Lashkar-e-Taiba remains

16/01/2021/11:14:pm
Washington: After reviewing the Terror List, the US along with ISIL-Sinai Peninsula (ISIL-SP) and other organizations operated Lashkar-e-Taiba (Lashkar-E-Taiba) from Pakistan. ) And Lashkar-e-Ingvi...

Bihar: 40 lakh people of 14 districts reeling under impact of flood

12/08/2021/10:10:pm
Kabul: Afghan government mediators have proposed a power-sharing proposal with the Taliban during peace talks in Doha. According to the news published on the...

Israel’s major attack on the seventh day of the battle, bombing...