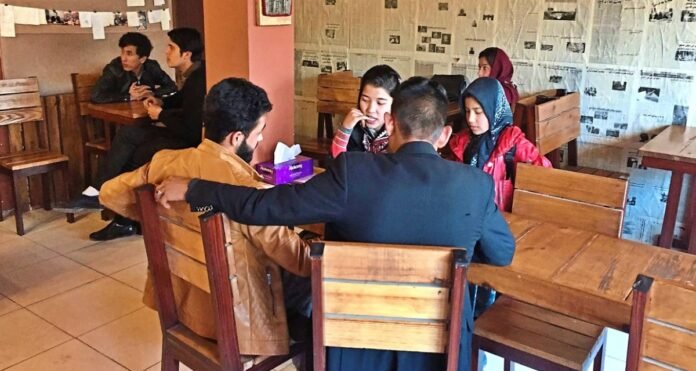 Kabul: The picture of Afghanistan has changed after the Taliban seized power. Women facing all the restrictions have also been banned from going to restaurants. The Taliban have banned the husband and wife from sitting together in restaurants. The terrorist organization has issued a decree that women and men can go to the parks on different days. Earlier in Herat, Afghanistan’s third-largest city, women were banned from issuing driving licenses and asked to cover their entire bodies.

According to Kabul News, there is also a Taliban prison in Herat where women are imprisoned without trial for sitting in taxis without male companions. Schoolgirls are also punished for posing for pictures with their male classmates. The Taliban count such acts as a crime.

Human rights and women’s rights are being violated openly in Afghanistan. The Taliban has also gone back on its promise to rule liberally compared to its previous term.

Rules also apply to husband and wife
Confirming the new order, a Taliban official said that women and men have been asked to sit separately in the restaurant. Riyazullah Seerat told AFP that restaurant owners have been verbally warned that the rules apply to everyone “regardless of whether they are husband and wife”. An Afghan woman said that on Wednesday, the manager at a Herat restaurant asked her and her husband to sit separately. Restaurant owners are seeing this order of Taliban as a loss to their business.

Burqa from head to toe, ban on traveling alone, ban on reading and singing… know what are the restrictions on women under Taliban rule

women exercise at home
The Taliban official said that according to the order issued by his office, women and men would go to Herat’s parks on different days. Seerat said women have been asked to go to the parks on Thursday, Friday, and Saturday. On other days men can go to the parks.

If women want to exercise during this time, then it is better that they do it at their homes. Women are already prohibited from going out alone across the country and now women’s driving licenses have also stopped in Herat.

Xi Jinping to become Lifetime President in China, decision will be taken at CPC...

08/11/2021/1:28:pm
Beijing: Chinese President Xi Jinping is soon going to be nominated for a third term. For this, the Communist Party is going to hold...

28/04/2021/11:19:am
New Delhi: The country is going through a very difficult phase amidst the second wave of Coronavirus. The number of those who lost their...

Russia’s big step between war with Ukraine closed its airspace for more than 30...

28/02/2022/9:07:pm
Moscow: Russia on Monday closed its airspace to more than two dozen European countries as well as Canada. The move comes after the European...