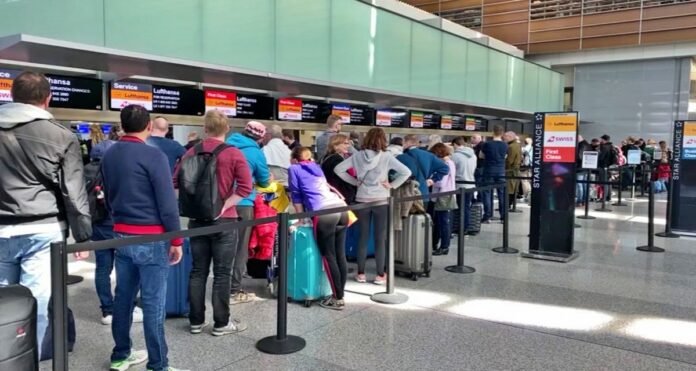 Johannesburg: Hundreds of foreign nationals who have come to South Africa on family and business trips are stuck as the country faces the new variant ‘Omicron’ of Covid-19. After arrival, many countries have implemented travel restrictions.

Britain announced on Thursday that all flights to and from South Africa and five neighboring countries would be banned from Friday afternoon. The country made this announcement after the new form of the virus came to the fore. Many other countries also took similar steps and indicated that only their own citizens would be able to return and they would also remain in segregation.

UK tourists have been particularly affected by the new ban as large numbers of people come to South Africa for tourism or family ties. Joanna Johnson said with teary eyes, “I have to go home for Christmas to be with my family but it feels like I’m stuck with my friends now.”

Meanwhile, Abdul Patel, an Indian-origin man at the airport, said that he was scheduled to return to Mumbai via Dubai on Monday but now wants a ticket on any available flight. An airline employee, who spoke on condition of anonymity, said the pressure was set to increase over the weekend as more countries canceled flights.

IPL to be played in UAE: September 19 to November 10

10/11/2020/10:54:am
Beijing: China on Monday said it had no reports of an Indian vessel with 23-member crew-carrying coal from Australia being stranded in the Chinese...

13/09/2021/9:04:pm
Seoul: North Korea has said that it has successfully tested a newly developed long-range cruise missile at the end of the week. The test,...

02/03/2021/8:38:pm
Washington: Two Republican Party MPs have introduced a bill in the House of Representatives calling for the US to restore formal diplomatic relations with...