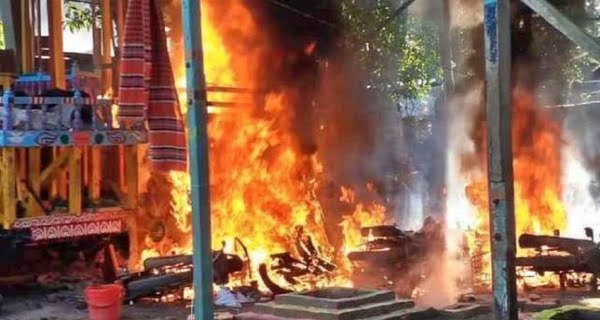 Dhaka: Attacks on Hindu minorities continue in Bangladesh. On Friday, a mob allegedly attacked devotees at the ISKCON temple located in the Noakhali area and was vandalized. ISKCON itself gave this information through a tweet. It has been told that the condition of a devotee is critical and at the same time, a lot of damage has been done to the temple. There were reports of communal violence in the Comilla area on Wednesday.

ISKCON tweeted, ‘Violent attack on ISKCON temple and devotees in Noakhali, Bangladesh. The temple has suffered a lot and the condition of one devotee remains critical. The temple has appealed to the Bangladesh government for justice in the matter and for the safety of all Hindus. On Thursday itself, Sheikh Hasina had said that strict action would be taken against the accused.

This week there were reports of Durga Puja pandals being targeted at several places in Bangladesh. It is being said that news had spread on social media that Quran was allegedly insulted at a Durga Puja pandal near Nanuar Dighi lake in Comilla town. Violence had erupted since then. The ISKCON temple became the latest victim of the ongoing violence at Hindu places.

After the Comilla violence, incidents of vandalism were registered at Hajiganj in Chandpur, Banshkhali in Chittagong, and Pekua in Cox’s Bazar. According to media reports, paramilitary forces were deployed in 22 districts after people died and were injured in this violence. On this matter, the Indian Foreign Ministry said on Thursday that the Bangladesh government had responded immediately, to ensure that the situation is under control.

News agency ANI quoted local media reports as saying that at least 1 person has died in an attack in Begumganj Upazila of Noakhali district. At the same time, 18 people have been injured. According to the report, when the miscreants took out a rally and attacked an area of ​​Begumganj Upazila. Police officer Mohammad Shah Imran in Noakhali informed that the deceased has been identified as 42-year-old Jatan Kumar Saha.

Indian teachers are trapped in Kabul University, requesting government to remove them soon

19/08/2021/10:52:am
New Delhi: The sound of gunfire has not been heard since the Taliban's occupation of Kabul, the capital of Afghanistan, but the crisis is...