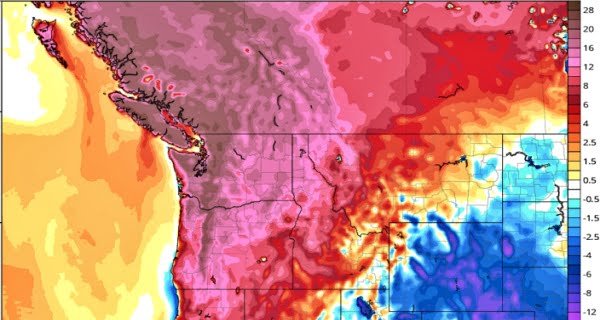 Portland: Day temperatures are being recorded in excess of 100 degrees Fahrenheit due to a heatwave affecting the Pacific Northwest region, which the National Meteorological Service has declared as intense, prolonged, record-breaking, unprecedented, Unusual, and dangerous. The temperature is recorded during the day is breaking all records for the highest ever recorded in places that are accustomed to such hot summers, disrupting Olympic qualifying competitions.

Oregon’s capital city, Salem, recorded the highest temperature in history on Sunday at 112 degrees Fahrenheit (44.4 degrees Celsius), four degrees above the previous record. The temperature in Seattle was recorded at 104 degrees Fahrenheit (40 degrees Celsius). The meteorological department said the record high was for a city better known for its rains and it was the first time since the record was set in 1894 that the region recorded three-digit temperatures for two days in a row. Records have been broken across the region and these temperatures are expected to rise further on Monday, which may start decreasing by Tuesday.

Electricity also went out in some places during the hot summer days. The heatwave continued as far as British Columbia, where the village of Lighton in the Canadian province recorded a temperature of 115 Fahrenheit (46.1 Celsius) on Sunday afternoon, the highest temperature ever recorded in Canada. A heat warning is in effect for much of western Canada and the city’s weather agency said several daily temperature records were being broken. These cities are telling residents to keep drinking water, take care of their neighbors, and not do much physical activity, and places where pools and cooling centers are available.

05/11/2020/9:50:pm
Bhagalpur(Bihar): A boat full of passengers has capsized in the river Ganga. The accident happened near Gopalpur Tintanga Jahaj Ghat of Navagachhia. According to...

22/06/2020/8:39:pm
Geneva: China has suffered a major setback at the international level amid the ongoing dispute with India. The Communist Party of China has lost...