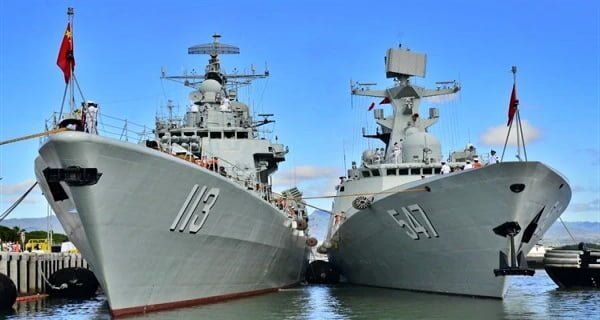 Xi Jinping, considered the most influential president of China after Mao Zedong, had said that in 2013, after coming to power, China would stand as the biggest power at sea (Naval Force). Realizing his intentions, in 2015 Jinping started a series of projects to make the People’s Liberation Army (PLA) a world class force. The result of this entire exercise is that the journey since 2015 has proved to be very powerful, at least for the Chinese Navy and China has become not only the largest naval force, but its larger America’s sweat is untouched by the intentions of being.

When Jinping started the aggressive steps to make China the largest maritime force in 2015, the US Agency of Naval Intelligence Office (ONI) had clearly foreseen that by 2020 China could become the world’s largest navy. Not only this, this agency also gave suggestions about taking meaningful steps while keeping America informed about this. Now let us tell you how far this competition between China and America has reached and what the atmosphere is looking forward to.

How big is the Chinese maritime force?
The Navy’s fleet of PLA had 255 warships in 2015 and according to the estimates of ONI, by the end of 2020, this figure has reached 360 for China i.e. more than 60 warships have been with China compared to America. . Not only this, China is continuing this lead and is running behind the target of 400 warships for the next four years i.e. by 2025.

Is America really left behind?
Can maritime strength be judged only by the number of warships? Not entirely, but this is a big aspect. Still, if we talk about core strength, America is not very backward yet but on some fronts it is still looking forward. For example, there is not much difference between the strength of the US and China when it comes to sea vessels, traditional submarines and destroyers.

On the other hand, the US Navy has 10 aircraft carriers in operation, which is an aspect of increasing the power of the US compared to China. Similarly, if the total number of active duty employees and weapons is seen then America is ahead. The US is still ahead in terms of nuclear power submarines and missile cells on surface ships.

What are the plans of China?
The emergence of China as a major force in the sea has been a matter of concern around the world because it is a direct challenge to the US. If China emerges as a large navy force, embroiled in border disputes with many countries in the South China Sea and East China Sea, obviously poses the greatest threat to Taiwan, the country that China describes as its own border. .

On the occasion of 75 years after the victory of the Second World War, the United States had announced its three-pronged strategy last year and clearly stated that it is looking at China as a long-term threat. According to the latest CNN report, China also has a border dispute with Japan, which deals with the Naval Force.

Now, China’s strategic maritime and ground border disputes with Taiwan, Japan or Korea are strategically using China as a threat to the world’s largest naval force. At the same time, it is also decided that responding to the maritime supremacy that the US holds with its fellow countries in the areas of the South China Sea and the Indian Ocean is also being included in China’s agenda.

19/08/2020/9:38:pm
Vadodara: Streets were waterlogged due to heavy rain in Vadodara District of Gujarat (Gujarat). This has happened for the second consecutive day on Wednesday...

20/07/2020/8:38:pm
Xiaomi has finally launched its new smartphone Redmi Note 9 in India. The phone has been introduced in three storage variants, whose initial price...