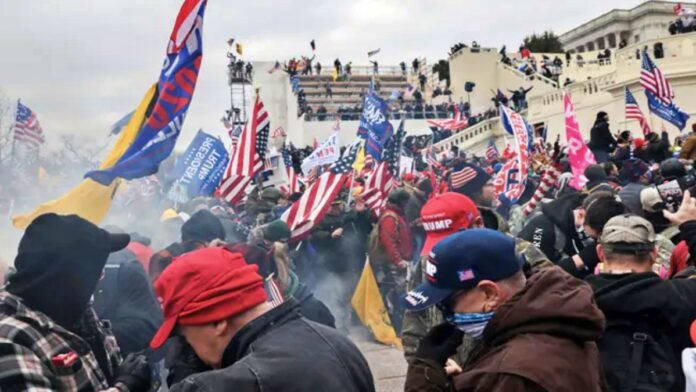 Washington: Former President Donald Trump is seen getting trapped in the case of riots in the US Parliament House on Capitol Hill. In the first hearing of the US Congressional Committee, the attack on Capitol Hill has been called a well-planned conspiracy by Trump supporters. Meanwhile, in a survey, nearly half of America’s population has also held Trump responsible for this violence. People surveyed believe that former President Donald Trump should be booked for his role in the attack on the Parliament House Complex (US Capital) on 6 January 2021.

A survey by the Associated Press-NORC Center for Public Affairs Research found that 48 percent of US adults say a former president should be booked for his role, while 31 percent say a case against him should not be recorded. 20 percent of the people say that they do not have enough information to give their opinion in this regard. 58 percent say that Trump is largely responsible for what happened that day.

When was the survey done?
The survey has been done after five public hearings were conducted by the parliamentary committee probing the January 6 incident. Ila Metze, a South Carolina Democrat, said Trump’s guilt was clear from the start. He appealed to his supporters to march towards the Parliament House on the morning of 6 January. Another poll participant, Chris Schlumer, said Trump is responsible for gathering crowds with his baseless claims of election fraud.

Significantly, Trump did not accept defeat in the presidential election held on November 3, 2020. He had leveled allegations of fraud in the elections. Amidst these allegations of Trump, his supporters had allegedly resorted to violence in the Parliament House complex on January 6.

27/03/2021/9:05:pm
Warsaw (Poland): Poland Police, Border Guard, and Fire Brigade plans to pension their dogs and horses retiring from service. Is being made so that...

Internet Has 341.7 Million Domain Name Registrations at the End of the Fourth Quarter...

Kidnap in Haiti threatens to shoot American citizens in the head, said- pay the...

23/10/2021/2:21:pm
Port-au-Prince: The leader of a notorious Haiti gang accused of kidnapping 17 members of a US missionary group has warned that the hostages will...

Time has come to tell China that enough is enough: US...