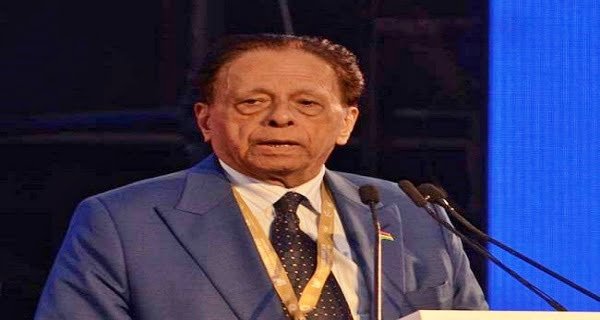 Port Louis: Former President of Mauritius and former Prime Minister Sir Anirudh Jugnauth have passed away. He was 91 years old. Jugnauth, who served as the President of Mauritius twice and Prime Minister six times, was awarded the Padma Vibhushan, India’s second-highest civilian honor, in 2020. President Prithvirajsinh Rupun said in a condolence message, “Mauritius has lost one of its greatest patriots, who was instrumental in the struggle to complete the process of decolonization in the country so that it can join the Republic of Mauritius including the Chagos Islands.” exercise his sovereignty over the entire territory of the

The newspaper ‘Le Maurician’ wrote that Jagannath, born on March 29, 1930, was one of the most remarkable figures and respected leaders of the country. He died on Thursday. His funeral will take place on Saturday. Prime Minister Narendra Modi on Friday spoke to his Mauritian counterpart Pravind Jugnauth over the phone and offered condolences on the death of former Prime Minister Anirudh Jugnauth.

Modi tweeted, “I called up the Prime Minister of Mauritius Pravind Jugnauth to condole the passing away of Sir Anirudh Jugnauth. Sir Anirudh Jugnauth will be remembered as one of the greatest statesmen of the Indian Ocean region and as a key architect of India’s special friendship with Mauritius. In a tweet on Thursday, Modi described Jagannath as a politician who was the architect of modern Mauritius. “A proud Indian diaspora, he helped build a special bilateral relationship that would benefit from his legacy,” he said.

Jagannath married Sarojini Ballah in 1957 and the couple has two children, including Prime Minister Pravind. Jugnauth served as the President of Mauritius from 2003 to 2012 and was elected as Prime Minister six times from 1982 to 2017. Later, he left his post for his son Pravind Jagannath. Anirudh Jagannath was a lawyer by profession and started his political career with the election to the Legislative Council in 1963.

In 1951, he went to the UK to study law at the Lincoln Inn of the University of London. In 1965, he attended the Constitutional Convention in London to discuss issues related to the country’s independence. Jagannath was a pioneer in the process of decolonization of the Chagos Islands and the struggle to promote the well-being of the Chagossian community. Their conflict led to this decision of the International Court of Justice (ICJ) and the Chagos Archipelago is an integral part of the territory of the Republic of Mauritius.

On the withdrawal of American troops from Afghanistan, 30-44 percent of the work...

02/08/2020/8:47:pm
New Delhi: After the Coronavirus outbreak, once again the tension between the US and China has increased. But, Elon Musk, the CEO of Tesla...

05/12/2020/10:17:am
Mumbai: Announcing a favorable move to promote digital payments in the country, the Reserve Bank on Friday said that the RTGS system used for...