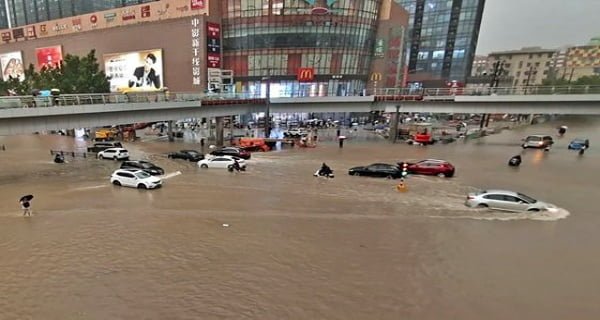 Beijing: At least 12 people have died in flood-related incidents in the provincial capital of China. Due to the severe floods, people were trapped in subway stations and schools, many vehicles were washed away and many people had to stay in offices overnight. State news agency Xinhua quoted the Henan Meteorological Agency as saying that Zhengzhou, the capital of Henan province, was flooded by about 20 cm during the rain between 4 and 5 pm on Tuesday.

Due to heavy rains, roads turned into rivers and subway stations, and several vehicles were submerged. In a video that surfaced, the city is seen being filled with water, and vehicles are seen floating in it. Xinhua reported that 12 people have died in flood-related accidents and nearly one lakh people have been evacuated to safer places.

14/12/2020/7:12:pm
Washington: US pharmaceutical manufacturer Pfizer has shipped the first consignment of the much-awaited Covid-19 vaccine from its Michigan warehouse. The vaccine has recently been...

17/07/2021/1:21:pm
Bengaluru:  The pandemic may have slowed down traffic from the general public but it has not reduced the number of road accidents that India has...

03/07/2020/10:24:pm
New Delhi: The Black Life Matters Campaign has launched a campaign against apartheid worldwide. In such a situation, Unilever has also removed the word...