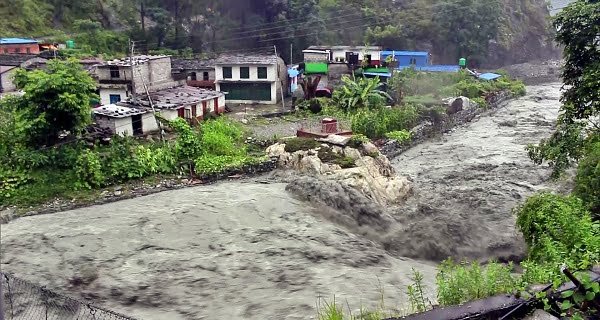 Kathmandu: Floods continue to wreak havoc in the Sindhupalchowk district of Nepal. The death toll in the Nepal floods has now risen to 7 and around 50 people are missing. Due to incessant rains in the country, a flood situation has arisen in this district. Many bridges have also been damaged due to this. The rescue team has started searching for the missing people. Relief and rescue operations are on.

The worst hit by heavy rains in the last 48 hours was the flood in the Melamchi River in Sindhupalchok in central Nepal. All seven people have died here. The bodies of the deceased were recovered on Tuesday night. About 50 people are missing, most of the workers working in the Melamchi drinking water project, officials said on Wednesday.

According to a report, not only people have lost their lives due to heavy rains but two concrete bridges and five to six suspension bridges have collapsed in Sindhupalchok. Agricultural land and fishing sites have been submerged. At the same time, the police post (Armed Police Force Camp) in Helambu town and the drinking water project site at Melamchi are inaccessible due to the flood-like situation. Around 300 huts were washed away in the villages along the Melamchi river. In the Lamjung district, about 15 houses were washed away. About 200 homes in the low-lying area are at risk. Sindhupalchok Chief District Officer Arun Pokharel said that the rescue and relief operation is going on by the Nepal Police Force and Armed Police Force.

19/01/2021/11:44:pm
Sacramento (US): An officer under the Sheriff of California was killed and another officer was injured in a Firing incident in the US. The...

The main reason for my attraction to India is Mahatma Gandhi: Barack Obama

17/11/2020/10:15:am
Washington: Former US President Barack Obama said that the main reason for his attraction to India was Mahatma Gandhi, whose "successful nonviolent movement against...

After the ceasefire, US Secretary of State Antony Blinken arrives in Israel

25/05/2021/9:10:pm
Jerusalem: America's Foreign Minister Antony Blinken arrives in Israel as part of the initial phase of his tour of West Asia. The purpose of...