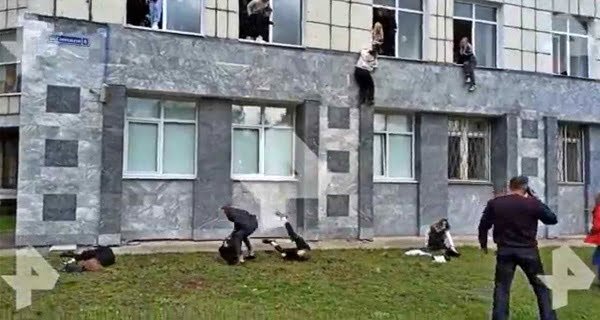 Moscow: Firing took place on Monday at Perm State University in Russia. According to the information of the news agency Reuters, 8 students died in the firing. Health officials in Perm said there were more than 10 casualties in the incident.

The shooter has been killed by the security forces. During the firing, the students jumped from the windows to save their lives. A video from Perm University has created a sensation.

The attacker has been identified as Timur Bekmansurov. What was the motive behind the shooting, it is not clear yet. The injured have been admitted to the hospital for treatment.

The city of Perm is located 700 miles east of Moscow, the capital of Russia. According to the report, the school’s social media alerted everyone present on the campus on Monday morning to leave the campus or lock themselves in a room if possible. Investigators said eight people were killed and six were injured in the firing. In a video shared on social media, people can be seen jumping out of the window and running outside.

RT News reported that Russian security forces killed a gunman who opened fire at the Perm State University (PSU) in the Perm Krai region on Monday morning. Russia’s TASS news agency quoted sources as saying, “Some students locked themselves in university auditoriums to protect themselves from the attacker. Some students jumped out of the windows.”

The ‘other world’ was hidden in the man’s 500-year-old house, people were shown private ‘Patal Lok’ in the video

The attacker opened fire with a very modern weapon. An intensive investigation operation is being conducted by cordoning off the area. As a precaution, security has been tightened in Siberia.

India, Russia, and China are hiding deaths from Corona: Trump

30/09/2020/11:03:am
Washington: In the US, the first presidential debate was held late Tuesday evening between Donald Trump and Joe Biden for the presidency. During the...

Mahua Moitra protested against the deployment of security personnel, then the police took this...

14/02/2021/10:48:am
New Delhi: Trinamool Congress MP Mahua Moitra on Saturday protested against the deployment of three armed security personnel at his home in the national...

Omicron creating a frightening picture! Covid is growing faster than the second wave in...

03/01/2022/9:42:am
New Delhi: The new variant of Coronavirus 'Omicron' seems to be beating all the previous formats in terms of infection. Some figures that have...