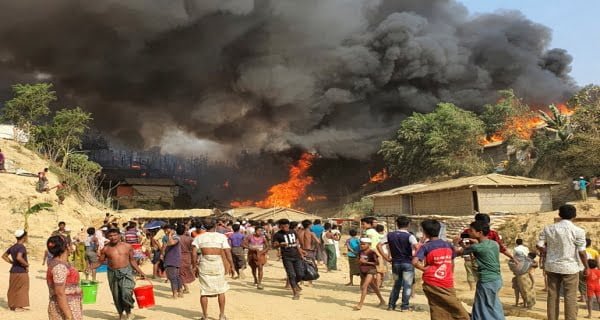 Dhaka: At least 15 people have died and 400 others are reported missing after a fierce fire broke out at the Rohingya Camp in the South East Cox’s Bazar district of Bangladesh. A senior United Nations official gave this information on Tuesday. Thousands of slums were burnt to death in the late-night fire. More than 45,000 people were living in these slums. Rescuers recovered 15 bodies on Tuesday. Hundreds of people injured in the fire are undergoing treatment in nearby hospitals.

“We have confirmed the deaths of 15 people so far, while 400 people are still missing and around 10,000 slums were destroyed,” United Nations Refugee Agency spokesman Johannes van de Klau said in a press conference. However, Bangladesh authorities have not confirmed the death toll so far.

The government’s deputy head of refugee commissioner Shamshad Dauja said an official inquiry had been launched to find out the cause of the fire. There are more than 1.1 million Rohingya refugees in Bangladesh’s Cox’s Bazar, who fled after military operations in neighboring Myanmar.

Fear of terrorist attack in India, ISIS-Khorasan may target temples and Hindu leaders

02/09/2021/8:33:pm
New Delhi: After the Taliban occupation of Afghanistan, the threat of terrorist attacks in India has increased continuously. At the same time, according to...

17/08/2021/3:28:pm
Chandigarh:  With Raksha Bandhan just around the corner, Blingvine has introduced a beautiful collection of designer jewellery for girls. These jewellery pieces are a perfect...

29/05/2021/8:51:pm
Cape Canaveral: The US space agency NASA has released a stunning picture of the raging and highly energized "downtown" of our galaxy. "Downtown" is...

Rocket attacks on US forces in Syria, no casualties

29/06/2021/9:58:am
Washington: There was a rocket attack on American soldiers in eastern Syria on Monday, in which no casualties were reported. A day earlier, on...