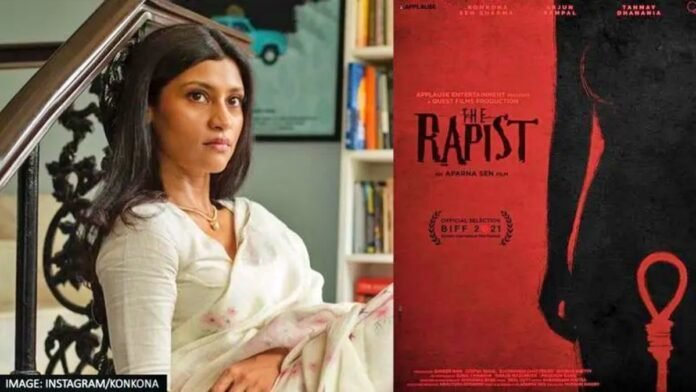 ‘The Rapist’ is a thoughtful examination of the anatomy of rape, as well as an experience of the mindset of its perpetrators and the trauma that follows. The film also marks the reunion of the mother-daughter duo of Aparna Sen-Konkana Sen Sharma after several acclaimed films including the National Award-winning Mr. and Mrs. Iyer.

About Applause Entertainment:
Applause Entertainment is a leading content and IP creation studio with a focus on premium drama series, movies, documentaries, and animation content. An Aditya Birla Group venture led by media stalwart Samir Nair, the studio has produced and released popular series across genres and languages ​​including Rudra: The Age of Darkness, Mithya, Criminal Justice, Scam 1992: The Harshad Mehta Story, Including critically acclaimed shows like Anhayan, Bhaukaal. These shows have been appreciated by the audience. There is a strong slate of theatrical and direct-to-streaming films in production recently which includes a few more films like Sharmaji Ki Beti, and Jab Khuli Kitab. Applause’s debut feature film The Rapist, directed by Aparna Sen, recently won the prestigious Kim Jisok Award at the Busan International Film Festival, 2021. Applause has partnered with leading OTT platforms like Netflix, Disney+ Hotstar, Amazon Prime Video, Sony Liv, MX Player, ZEE5, and Voot Select for its creative output.

19/11/2021/12:21:pm
Mumbai: Are Neha Kakkar and Rohanpreet Singh going to be parents? These questions are once again raising concerns in the minds of people. Seeing...

India’s No.1 Mobile Skins Brand, Gadgetshieldz to Launch Its Fabric Texture This Week

25/12/2021/12:28:pm
Chennai:  After giving a glimpse to their followers on Instagram and Twitter about a couple of weeks ago, Gagdetshieldz®, India’s No.1 Mobile Skins and Screen Protectors brand,...

04/05/2022/10:44:pm
New Delhi: The announcement made by the Reserve Bank on Wednesday to control inflation created an outcry in the stock market. Due to the...

26/10/2020/11:00:am
Washington: Democratic presidential candidate in the United States, Kamala Harris, has said that her party's views on issues such as health care and the...

20/10/2021/4:44:pm
Riyadh: Saudi Arabia has revealed its plans to build a giant theme park and hotel on an oil rig platform to attract tourists. Saudi...