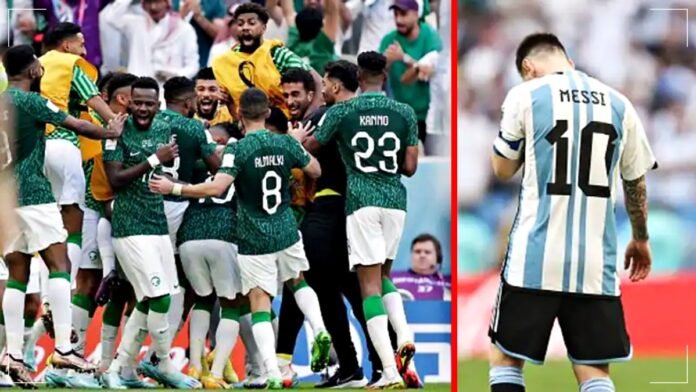 Doha: There was a big upset on the third day of the FIFA World Cup on Tuesday, when Saudi Arabia recorded a shocking victory over Argentina and defeated them 2-1. Star player Lionel Messi gave Argentina the lead in the 10th minute. He scored a penalty against Saudi Arabia. With this goal, Argentina’s team is leading 1-0 in the match. Lautaro Martinez scored the second goal for Argentina, but it was disallowed by the referee.

Martinez’s goal disallowed, Argentina under pressure
Argentina’s team, which is considered to be a World Cup contender, did not appear in rhythm in this match against Saudi Arabia. Argentina’s star Lionel Messi scored a goal in the 10th minute of the match to give the team an early lead, which lasted till half time. continued. During this, Martinez also scored a goal and put pressure on the opposition Saudi Arabia, but the referee rejected it.

The winning streak of 36 matches was broken
The Saudis fought back in the second half as Saleh Alsehri scored in the 48th minute to equalize Argentina’s lead, shortly after Salem Aldawsari scored in the 53rd minute to give Argentina a 2–1 lead. Made it After this, Argentina kept trying to score continuously but he could not succeed. Along with this humiliating defeat from Saudi Arabia, Argentina’s 36-match winning streak also came to an end. During this, Argentina won 25 matches, while 11 matches were drawn.

Became a unique record
Saudi Arabia has become the first team since 1974 to score two goals in the first match of the FIFA World Cup against Argentina. In 1974, Poland defeated them 3-2 for the last time. This is only the third victory of Saudi Arabia in the history of the World Cup. After this victory against Argentina, his confidence will skyrocket. Argentina’s next match is now against Mexico on 27 November and Poland on 30 November. To reach the pre-quarterfinals, they will now have to win both their remaining matches.

29/01/2021/9:54:pm
Mumbai: The Mumbai Local Train Services, the lifeline of the country's economic capital Mumbai, will start for the general public from February 1. In...

If India ‘clean swipe’ New Zealand in Kolkata match, then it will make this...