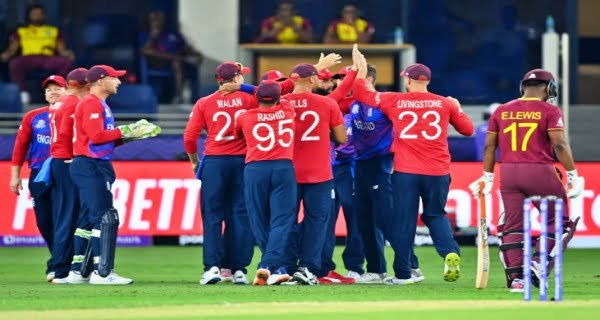 New Delhi: The match between West Indies and England team (West Indies vs England T20 WC). England won his second title by hitting West Indies. With this victory, West Indies set their record of unbeaten victory against England in the T20 World Cup.

When these two teams came to the field on the opening day of Super-12, then crores of cricket lovers once again expected to see the last over thriller. But, on the night of Saturday, 23 October, this did not happen. Chasing a very small score, the England team won the match by 6 wickets and started their journey with a win in the ICC T20 World Cup, 2021, and changed the losing record in the history of the World Cup.

West Indies battered in front of Adil Rashid’s deadly bowling
England won the toss in this match and decided to bowl first. The entire team of West Indies, who came to the field to bat, was settled on the score of 55 runs. West Indies team could play only 14.2 overs and were all out. Chris Gayle (Chris Gayle Universe Boss) scored the highest 13 runs. None of his batsmen could cross the double-digit mark. Adil Rashid bowled the best of the T20 World Cup for England and took 4 wickets for just 2 runs in his spell of 2.2 overs. Apart from Adil, Moeen Ali and Tymal Mills also took 2-2 wickets. Chris Woakes and Chris Jordan also got one wicket each.

England’s biggest win of T20 World Cup
After the very embarrassing batting of the West Indies, it seemed as if England would easily achieve this very small and easy target. But, it was not that easy either. Chasing a target of 56 runs for victory, Jason Roy 21 runs and Jos Buttler 24 not out, shared a 21-run partnership for England. But Ravi Rampaul gave the first big blow to England by taking the wicket of Jason Roy.

At the same time, Akeel Hussain bowled brilliantly, dismissing Jonny Bairstow and Liam Livingston on a personal score of 9 runs and put England’s very easy victory in a bit of difficulty. England won the match by 6 wickets in 8.2 overs thanks to Jos Butler’s unbeaten 24 runs.

Significantly, with this fresh win, England has registered their biggest win so far in terms of balls in the T20 World Cup. England won the match in this match with 70 balls to spare. History tells that, before this, England’s record for the biggest win in terms of the ball was 67 wins.

Today is Constitution Day of United States, know important things related to it

17/09/2021/9:36:am
America: Today i.e. September 17 is Constitution Day of America, the superpower of the world. The Constitution of the United States of America...

Due to Swati Mohan of Indian origin, NASA created history on Mars

19/02/2021/10:54:am
New Delhi: The US space agency NASA has sent the rover Perseverance Rover as part of its ambitious mission to research the planet Mangan....

23/06/2020/2:34:pm
New Delhi: The US has termed the Government of India attitude in the matter related to air operations as discriminatory. The US has said...