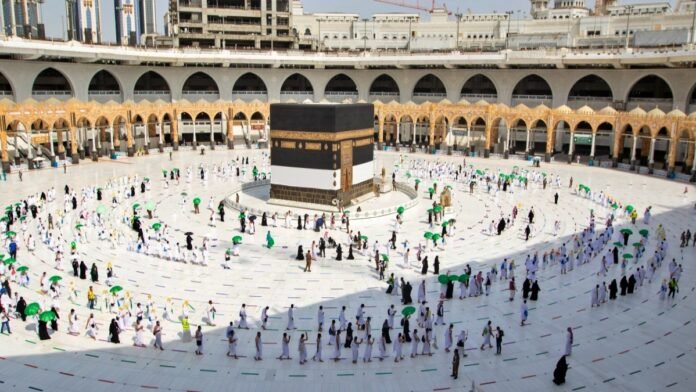 Mecca (Saudi Arabia): Saudi Arabia has allowed one million Muslims to perform Hajj this year. Saudi Arabia is once again welcoming foreign Haj pilgrims for the first time since 2019. Due to the Corona epidemic, only Saudi Arabian residents were allowed to perform Hajj in the years 2020 and 2021. According to a statement by Saudi Arabia’s Hajj Ministry, by Sunday night, 2 lakh 66 thousand Hajis had reached the holy cities of Mecca and Medina Sharif.

According to the Saudi Press Agency, 171,606 pilgrims have left Medina for Mecca in the past few days, while 95,194 are still in the holy city. A total of 79,237 Indian pilgrims will participate in Haj this year. The Central Haj Committee has allowed 56,637 pilgrims to go on the Haj pilgrimage. Meanwhile, 22600 Haj pilgrims will reach Saudi Arabia through Haj Group Organizers (HGOs).

Hajj 2022 will begin next week (7 July), as Muslims complete the Hajj between the eighth and 13th day of the month of Dhul-Hijjah (the 12th month of the Islamic calendar year). Eid-ul-Adha is expected to be celebrated on 9 July 2022 in most Islamic countries.

Javid Kalangde said that the last flight from Mumbai for the last consignment of Haj pilgrims will leave on July 3. With this, the Haj Committee will complete the work of sending Haj pilgrims on a pilgrimage. The Haj Committee told that the Hajj period will start from the 8th Zil-Hijjah (7th Zil-Hijjah prayer Maghrib). Moallim buses carry pilgrims from Mecca to Mina, which is 7-8 kilometers from Haram Sharif.

The Haj Committee has appealed to the Haj pilgrims to follow the programs of Moallim as all the pilgrims are adequately monitored and taken to Mina on time. Therefore, Haj pilgrims should strictly follow the schedule as far as possible and cooperate with the staff of Moallim.

In Mina, travelers can be accommodated in camps provided by Moallim. The Haj Committee has asked Haj pilgrims to follow social distancing and maintain good hygiene and follow the instructions and health guidelines of the local Haj authorities.

29/01/2021/9:36:pm
New Delhi: Amidst the corona epidemic spreading across the country, sluggishness has been seen on the economic front. Tax relief is expected in this...

04/08/2020/12:13:am
Bhopal: Madhya Pradesh is also enthusiastic about the Ram Mandir Nirman program to be held in Ayodhya on 5 August. BJP and Congress have...

80 farmers to join ‘Kisan-Sammelan’ today, before the 8th round of talks with Modi...

The G-20 Summit between the Corona will be digital this week...

Before the corona vaccination starts, the British PM said – the...