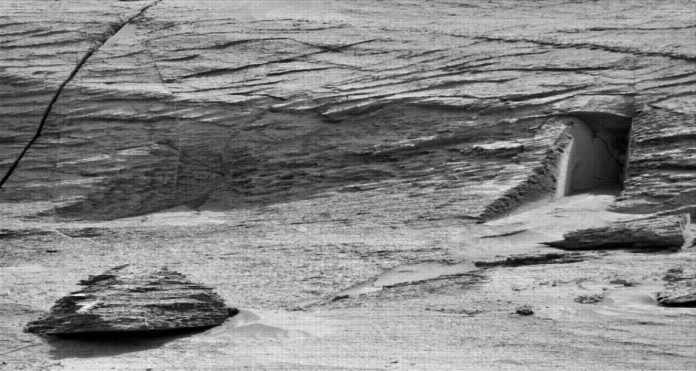 New Delhi: There are many mysteries in the world of space. Day by day information is being received about these hidden secrets. Meanwhile, the American space agency NASA found something strange on Mars. Recently NASA’s Curiosity rover saw a square path in stone. Seeing which it seems that some way has been made there. However, what is inside this door is made inside the stone, it is not known at the moment.

Recently NASA has shared a picture. Everyone is shocked after seeing this picture. A picture was taken on 7 May 2022 by the MastCam of the Mars Curiosity rover. This picture was found in black and white. Which was later colored by NASA scientists.

After seeing this picture, NASA scientists initially told that first, they thought that a way had been found to get to the center of Mars. Or it can also be the door of an alien’s house. At the same time, some scientists believe that it is a shape, which is made by the breaking of stone due to the earthquake on Mars. Or else this shape is the result of some kind of pressure lying on the stones. Actually, information about the most terrible earthquake on Mars was revealed on 4 May 2022.

After seeing the picture shared by NASA, some scientists believe that it is a pit made in the middle of the stone, which was filled with red clay. Due to the earthquake on Mars, the soil was broken and cleared and due to this, the door started appearing. The place where this door is found is called Greenheugh Pediment.

Describing this picture, NASA said that, in the last few years, the landers and rovers on Mars have taken very strange and spectacular photographs. In these pictures, potholes filled with snow, stones of different sizes, empty mountains, and much more.

Whenever some strange things are discovered in space. To associate him with aliens. But, regarding this picture, NASA has said that we should stay away from such stories. It is not right to spread any kind of rumor about anything until the investigation is done.

30/10/2020/10:46:am
United Nations: On the occasion of the 20th anniversary of the resolution calling for equal participation of women in peace talks, the head of...

WhatsApp closed more than 20 lakh accounts of Indian users in...

12/10/2021/9:57:am
Stockholm: Three American economists have announced on Monday the Nobel Prize in Economics for their pioneering research. One of these proved that raising the...

Now the pill will treat corona, know everything about the first...

37-year-old woman climbed on the mountain after becoming nude, told ...

Minneapolis Council to give $ 2.7 million to family of George...