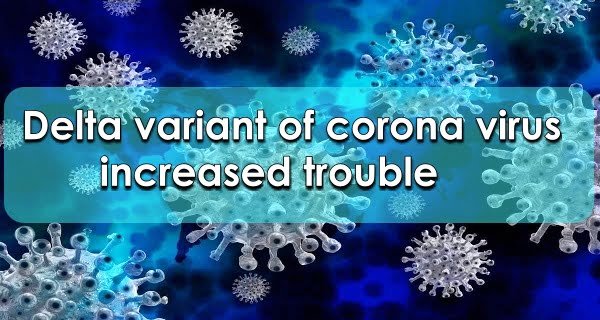 New Delhi: The highly contagious form of coronavirus is now spreading rapidly all over the world. For this reason, many countries have tightened the restrictions imposed on them, so in many places, the plan to remove the lockdown has been put on hold or its period has been extended, in order to help break the chain of the virus. So to receive. This form of coronavirus has been named ‘Delta’. The World Health Organization listed this type of virus as a variant of concern.

Britain considering increasing lockdown due to the delta nature
The UK government is considering extending all lockdown restrictions by four weeks after 21 June amid a steady increase in cases of the delta form of Covid-19. The UK has reported the highest number of cases of Covid-19 at 8,125 in the last 24 hours since the end of February and Public Health England (PHE) has learned that the Delta form (B1.617.2) has about 30 thousand cases in a week. has increased to 42,323. Downing Street sources told the BBC that a final decision had not yet been made and various options were being considered. British Prime Minister Boris Johnson is studying the latest figures. On Monday, he will make an announcement regarding the lockdown.

WHO issues warning on the spread of delta type in Europe?
The World Health Organization’s Europe director has warned that the high-transmission type of COVID-19 could ‘take root in the region’ as many countries prepare to ease restrictions and allow more social events and cross-border travel. Dr. Hans Kluge of the WHO said during a press conference on Thursday that this type is also known as the ‘delta’ type and there are also symptoms of some vaccines being ineffective against it. He warned that some sections of the population, especially those over the age of 60, are still not vaccinated.

WHO Europe’s regional director said, ‘Cases gradually increased in younger people during last summer and then infection spread to elderly people, causing the outbreak of the epidemic to increase significantly.’ Kluge said that the cases of Covid-19. The increase in deaths resulted in deaths in the summer and winter of 2020 and then the lockdown. “We should not repeat the same mistake again,” he said.

Confirmation of delta form of coronavirus in France
On 29 April, France confirmed the first case of delta form of coronavirus spreading in India. The Health Ministry said on the night of 29 April that three people in the Bache du Ronne and Lot et Garonne regions of southern France have been confirmed to be infected with the new form of the virus. All three people had traveled to India in the past. The country’s health minister, Olivier Veran, said that many groups of corona types are affecting people in France, especially in the southwest region.

Delta form in Sri Lanka increases the risk of coronavirus
In Sri Lanka, on 8 May, the first case of delta form of coronavirus (b.1.617) was reported in a person who had recently returned from India. This person was living in an isolated habitat center in Colombo. The report released by the Department of Immunity and Molecular Medicine of Sri Jayawardenepura University said that the infected person came from India and was living in a separate habitat center in Colombo set up for the returnees. In Sri Lanka, on May 7, the maximum number of 19 people died in a single day due to a coronavirus infection. Not only this, since April, the cases of coronavirus also started increasing significantly.

‘Delta’ terror in Guangzhou, China
In China’s southern province of Guangzhou, in view of the increasing cases of a new form of Covid-19, the closure of cinema houses, theatres, night clubs and other activities in closed places has been ordered. People of China’s southern province of Guangzhou cannot go out without any urgent work, even if allowed, any person will have to show a report confirming infection-free, which is within 48 hours. This rule will also apply to people in the surrounding province of Guangzhou. According to these rules, eating while sitting in restaurants has also been banned. After eight new cases were reported in Guangzhou till June 9, the number of infected has crossed 100. All these cases have come to the fore since May 21. Doctors said that this new form of infection that surfaced in Guangzhou is ‘Delta’, which is highly contagious.

The delta type, B.1.617.2, is 50 percent more transmissible than the alpha type, B1.117, which first appeared in the UK, say researchers at the University of Yology (IGIB). The researchers said, ‘We have found that this surge of SARS-CoV-2 infection in Delhi is due to a new highly infectious type (VOC), B.1.617.2, which has potential immunodeficiency properties.’ To determine whether the SARS-CoV-2 variant could be responsible for the April 2021 outbreak in Delhi, the researchers sequenced and analyzed community samples from Delhi from November 2020 to May 2021.

What is the reason for the spread of the delta form of coronavirus?
The ‘delta’ form of the coronavirus, which was first found in India, is now becoming a major cause of infection in Britain. Some experts have cautioned that the prevalence of the delta form may be up to 100 percent higher than the alpha that previously wreaked havoc in Britain, but this is not the only reason for the delta to dominate. The dominant forms of the virus have a biological advantage, which is a mutation, through which these forms spread very easily between people. Jonathan R. Goodman, a Ph.D. researcher in the Department of Human Genesis Studies at the University of Cambridge, said the UK government’s extension of the interval between the first and second doses of the vaccine was because the delta form had a chance to infect people. In this way, while the delta form spread in India due to natural elections, perhaps the reason for its spread in Britain was an inadvertent election and due to this it remained and grew.

Positive discussion on Afghanistan peace process between America and Pakistan

08/06/2021/10:43:am
Washington: The White House said that there have been constructive discussions between Pakistan and the US through the military intelligence unit and diplomatic channels...

Nawaz used to get financial help from Osama to topple government

31/01/2021/10:48:pm
Islamabad: There has been an earthquake in the politics of Pakistan. Due to which there is political instability throughout Pakistan. The biggest reveal has...