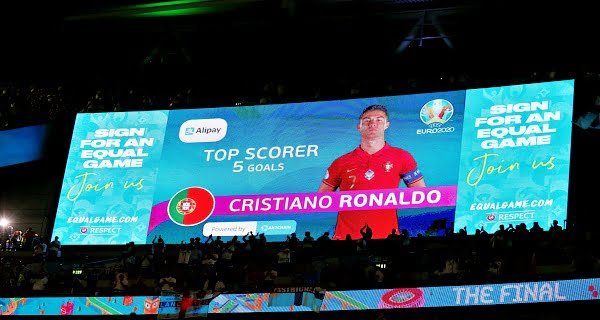 Hangzhou, China: Portuguese football star Cristiano Ronaldo today became the winner of the Gold Trophy of the Alipay Top Scorer Awards at UEFA EURO 2020. Regarded as one of the greatest footballers of all time, Ronaldo netted five goals and made one assist at the competition. Patrik Schick from the Czech Republic was awarded the Silver Trophy, scoring five goals, while France’s Karim Benzema was the recipient of the Bronze Trophy, netting four goals.

The Alipay Top Scorer trophies are the first major international football Top-Scorer trophies to embed blockchain in their design, incorporating a hash code at the base through which scoring records of the tournament’s top three scorers can be uploaded and permanently stored on a blockchain-powered by AntChain. Using the hash code provided, Alipay will upload the trophy data to the blockchain, ensuring a permanent, immutable record of the top scorers’ achievements.

“Our warmest congratulations to Cristiano Ronaldo for his phenomenal performances at UEFA EURO 2020, and for winning the Alipay Top Scorer Gold Award,” said Eric Jing, Chairman, and CEO of Ant Group, who presented the top scorer trophies via video from Hangzhou immediately after the final game of UEFA EURO 2020. “Just as we have used blockchain technology to permanently preserve the wonderful scoring moments of the top scorers like him, we will also keep working with UEFA, to explore innovative digital solutions that improve fans’ experiences while enjoying football.”

UEFA and AntChain, one of the technology brands of Ant Group, on June 10 announced a five-year global partnership to jointly explore using blockchain technology to accelerate the digital transformation of the football industry and improve the experiences of fans across the globe. Under the agreement, AntChain became the official global blockchain partner of UEFA EURO 2020.

To honor the performances of the top-scoring players, an AntChain-developed digital record of highlights from the UEFA EURO 2020 top scorers will be preserved at UEFA’s headquarters, making it the first digital collectible in the history of the EURO Top Scorer.

“The top-scoring moments digital collectible will serve as a lasting memento, encouraging football fans around the world to spread the team spirit and happiness that are part and parcel of this beloved sport,” said Mr. Jing.

The UEFA EURO 2020 Top Scorer trophies are designed by Alipay, the world’s leading digital payment and lifestyle platform operated by Ant Group, which has been UEFA’s global partner since November 2018.

On June 12, UEFA launched a new mini-program with Alipay to improve engagement with mobile-savvy Chinese football fans. Dubbed the UEFA EURO 2020 Official Digital Hub, the mini-program offers football fans across China an inside look at the tournament through regular news updates, interviews with key players, and much more. The UEFA mini-program has rapidly become the most popular sports-focused mini program on Alipay, attracting over 12 million users as of July 11.

During the tournament, Alipay launched a campaign via the UEFA EURO 2020 Dream Tour mini-program that enables authenticated users to earn points by engaging in various fun activities. Powered by AntChain’s technologies, the top 1,600 users will receive gold, silver, and bronze digital trophies as a form of digital souvenir with certificates on a blockchain.

Alipay also launched “Top Scorers on Campus,” a new advocacy program dedicated to supporting the development of campus football in China. To inspire more teenagers to pursue their football dreams, the program will award trophies with the same design as the Alipay Top Scorer Gold Trophy of the UEFA EURO 2020 to the best young players in campus football tournaments across China. Similar to the UEFA EURO 2020 Top Scorer Trophy, these students’ scoring records and achievements will also be stored on a blockchain provided by AntChain. Opinion of AIIMS directors of many states, if vigilance is not taken on festival,...

18/08/2021/9:55:pm
New Delhi: The festival season has started in India. Even though the number of corona infections is decreasing, but there is a need to...

25/07/2022/9:47:am
Lucknow: Big news has come out from Uttar Pradesh (UP). A major accident happened this morning in Barabanki Accident here. Two double-decker buses collided...

Passenger gets a life-long ban on travel for punching flight attendant,...

1 crore 30 lakh people are on the verge of starvation...