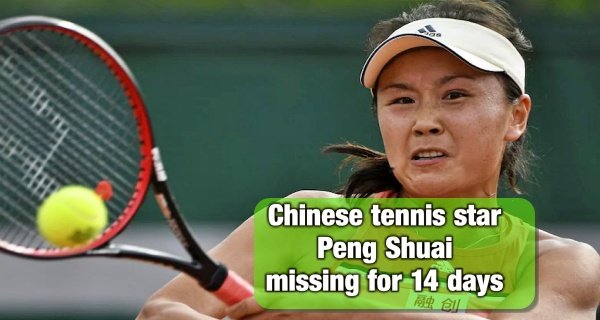 Taipei: A Chinese professional tennis player has gone missing after a former top government official was accused of sexual harassment and her security has raised concerns over her emails claiming to be safe. Athletes and others around the world have raised concerns about her well-being and safety. So far the questions arising from all over the world have not been answered. Chinese officials have not said anything publicly.

Two weeks ago, Grand Slam doubles champion Peng Shuai alleged that she was sexually assaulted by a former top government official. China’s first ‘MeToo’ issue has not found a place in the domestic media and online debate on it has also been censored. Women’s Tennis Association CEO and President Steve Simon have questioned the legitimacy of the email sent to her. In this, Fang has said that she is safe and that the allegations of harassment are false. CGTN, the international unit of China’s state broadcaster CCTV, posted the email on Thursday.

Simon has said he is not sure whether the email was written by Shuai and has called for a full investigation into the matter. He said that China could be snatched away from hosting the tournament if a proper reply is not received. Naomi Osaka and Novak Djokovic have also tweeted on this matter. Online ‘Where is Feng Shui’ is trending. Serena Williams tweeted that she was shocked and saddened by the news. He said, “We should not remain silent. There should be an inquiry into this matter.” International Tennis Federation spokeswoman Heather Boller said she was in contact with the Chinese Tennis Federation and was also in talks with the WTA and the International Olympic Committee.

08/10/2020/8:35:pm
New Delhi: The Central Government on Thursday allowed political meetings with certain conditions in the Bihar assembly elections and by-elections in various states. According...

22/11/2021/11:12:pm
New Delhi: The Modi Government has now started the exercise of selling some properties of BSNL and MTNL. The total value of these properties...

Xiaomi’s smartphone’s entry into the new year, more than 3 lakh phones sold in...

How lung temperature affects the replication of coronavirus is detected

01/04/2021/10:04:pm
London: Differences in the natural temperature of the upper and lower respiratory tracts affect the replication of new coronaviruses and the subsequent activation of...